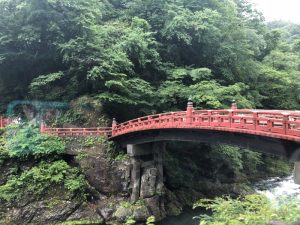 In Spirited Away, a giant monster of dirt, mud, and slush enters the bathhouse. Chihiro is the only one who dares approach this pile of stink and gets to work right away, turning on the giant water faucet and dousing the creature. Then, she finds a handle curiously sticking out from the monster’s side. Chihiro and the rest of the bathhouse staff tug on it and out comes a bicycle—and other trash: metal pipes, pots and pans, litter you would find in the ocean. Turns out, the slush monster is actually the River God—the scene is a powerful visualization of the harm we cause our environment. 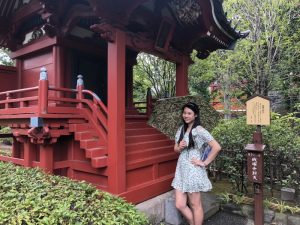 On our cultural excursion, we drove up to Nikko, a city north of Tokyo, rich in nature and World Heritage sites. I understand why Hayao Miyazaki was so convicted by the beauty of Japan to insert environmental themes into nearly every one of his movies. Here, the clouds obscure tall trees, surrounding us with mystery as we’re wrapped in droplets of water. We walked through the Toshogu shrine, where the founder of the Tokugawa Shogunate was buried. We entered sacred places barefoot, the gold steps leading up to the main shrine freezing to the touch. I wondered what it would have looked like to see all the small snow huts lit up with candles. 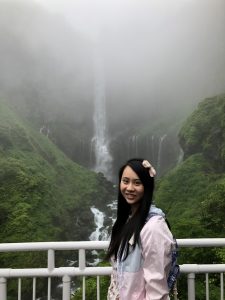 There’s a story behind each of the famous animals at the shrine—a cat, 3 monkeys, and a dragon. My favorite is the sleeping cat: he is much smaller than I imagined, positioned above a doorway. His eyes are serenely closed. There are two interpretations: it is sleeping because there will always be lasting peace in Japan, or it is sleeping but ready to pounce on trouble-makers should the peace be disturbed. 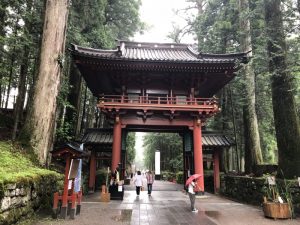 Charms are sold at every corner of the shrine: good luck, good studies, no traffic, successful childbirth—the list goes on and on. Some are small bells without a hole, so your wish doesn’t fall out. On wooden planks decorated with painting sof the Crying Dragon, people write their wishes and hang them on boards. One of them says, “I want to marry Emma Watson” in Japanese.

Mist and fog partly shrouded our view of the Kegon waterfall, but we could feel the thundering of the water and the presence of the falls cutting through the surrounding greenery regardless. There was a box full of love fortunes wrapped in cute paper; my friends inserted a coin and take one. Fortunately, it’s good luck: something about expecting too much in a relationship, yet having everything you need right in front of you (and how black is your best color, and socks are your thing). Overall, a good fortune. 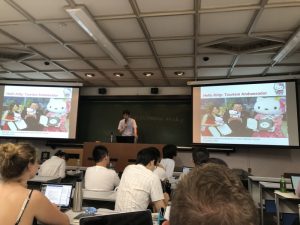 Our first class, an intro to Japanese politics, opened with a video of Hashimoto Mouse, a quintessential Japanese character. He is extremely polite and hospitable to the American journalist mouse who is visiting. There is an aura of mystery surrounding his customs and his culture, but it is an overall positive representation of the Japanese.

We contrasted this video to Mickey Rooney’s jarring and offensive portrayal of Mr. Yunioshi in Breakfast at Tiffany’s. The character is rude and stupid at the same time. Along with the exaggerated accent and yellow face, Mr. Yunioshi represents another more sinister view of the Japanese. 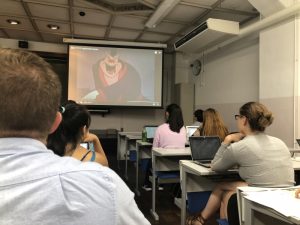 In our second class, we examined how Japan is actively trying to change that ugly perception of her citizens. “Soft power” is a term defined by Joseph Nye that unlike hard power, does not involve a show of force or coercion to achieve the country’s goals. Rather, soft power  consists of culture, political values at home and abroad, and foreign politics. Soft power can also be paired with hard power—for example, Japan’s military aid to the Philippines for 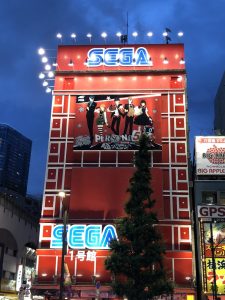 That week, as I was exploring Tokyo, I couldn’t help but identify the strength of Japan’s soft power everywhere. The initiatives of “Cool Japan” through public-private partnerships are evident in Tokyo and the world’s obsession with Japanese animation, fashion, and food. The video that announced Tokyo for the 2020 Olympics is emblematic of the “Cool Japan” factors the country hopes the world finds attractive. Young girls obsessed with Harajuku fashion were appointed Kawaii Ambassadors. Doraemon was appointed Japan’s first official anime ambassador. The Ministry of Foreign Affairs founded an International MANGA Award to promote understanding between cultures.

Tokyo is chock full of this unique culture. Kawaii characters are on the subways and on your desserts; anime and manga themed stores are multiple stories high; frilly dresses and schoolgirl skirts are snatched off the shelves at the speed of a bullet train. For now, there’s no harm that some of this culture is government funded (that’s why it’s called soft power), but I can’t help but sense a danger (however far off) that creative art can turn into propaganda. Some manga artists share this concern as well, hoping the government backs off from their work. However, at least in the present, I don’t think Doraemon poses that big of a threat to other countries—I doubt that this “blue fatty,” as a Chinese newspaper put it, will be running the country any time soon. 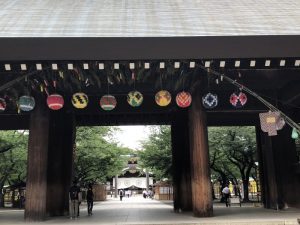 In the middle of the week on my own time, I went to the ever-controversial Yasukuni Shrine. The shrine honors those who have died while serving Japan from 1868 onwards, including 1,068 war criminals. While the shrine is privately owned, previous prime ministers’ visits have sparked protests, viewed by the Chinese as acts that validate and commemorate Japan war atrocities. The war dead are regarded as divinities. When I visited, people were setting up for the upcoming Mitama Festival (July 13-16) to celebrate their souls. 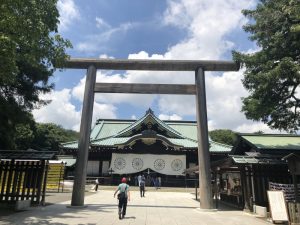 I had actually visited the day before, but I decided to return for what I read was the most controversial part of the grounds: the Yushukan Museum, which, like the shrine, is also privately owned. Our group project was to determine both Chinese and Japanese perspectives over Japan’s war atrocities. Here are some of the things I found in the museum: 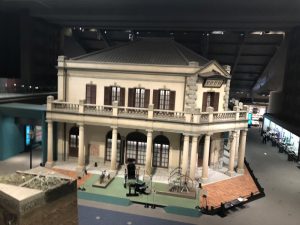 I looked into the Chinese and Japanese responses to the controversy. The Chinese are understandably enraged, in both political circles and among the common people. China filed an official protest and demanded an apology. Chinese Foreign Ministry spokesman Lu Kang declared Chinese government is “firmly opposed to Japanese politicians’ wrong practices,” urging “Japan to face squarely and deeply reflect on its history of aggression and win back the trust of its Asian neighbours and the international community.” Chinese people took to the streets across the world as well to protest various Prime Minister visits.

The Japanese side is more complex. Japanese officials have shown reluctance to apologize. Internal Affairs and Communications Minister Sanae Takaichi who visits regularly said, “The way we commemorate [the dead] shouldn’t turn into a diplomatic issue.” Prime Minister Abe also suggested he would not issue a direct apology to Japan’s former victims. “I uphold the basic thinking behind past war apologies, which means there isn’t a need to reiterate them.” 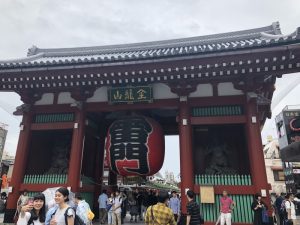 As shown by the poll above, the number of Japanese who believe Japan has sufficiently apologized has grown steadily throughout the years. Yet, there is evidence of remorse among citizens: leading up to Abe’s speech, 42% of Japanese believed that an apology should be included; a group that represents the war dead’s families are urging Yasukuni Shrine to remove the names of 14 convicted criminals.

In class, we discussed Japanese societal norms (trying to determine why populism is not a thing here) as well as the many aspects of the frail yet resilient China-Japan relationship. It’s certainly a prickly area to navigate for both countries; with high stakes on both sides, this is a relationship the United States should no doubt keep an eye on as we move forward.

At the end of the week, we finished our summer session with group presentations and essays. I’ve given a lot of thought to what Japan should do to smooth its relations with China and Korea, in its treatment of war history. We discussed multiple options, some of which have been taken in the past: apologies, financial compensation, denial, silence. In my eyes, apologies can be empty if there is no understanding of what the apology is for. Perhaps the first step of bridging the divide is to acknowledge and educate the younger generations about the past. This would open up a reciprocity in youth, our future diplomats and leaders, to then listen to other sides of the situation. Only then are they fully equipped to engage. Though Japan is still far from reaching Germany’s level of openness and reparation for its war crimes (see: a possible move for mandated field trips to concentration camps), knowledge is the first and most important step. This is how we grow empathy, this is how we leave the world better than it was before.

Thank you FUTI for the scholarship!

More on my blog: secondstarcass.wordpress.com