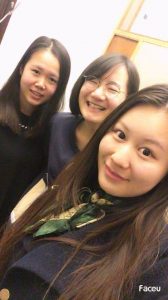 With my GIS group members, after submitting our final project.

My first semester in the Urban Planning program at Columbia GSAPP (Graduate School of Architecture, Planning and Preservation) was a semester of transformation. In this report, I would like to elaborate on two main changes that I went through. One in my attitude towards group work, and the other towards Japan.
Group work is an important element in our program, presumably because as urban planners, we are required to coordinate between different stakeholders. Although I was aware of this when I entered the program, I was somewhat worried whether I would be able to handle it; I did have experience with group work, but not with such diverse members in terms of skill, origin, and character. 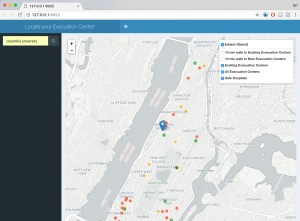 The website containing the interactive map that I created for my GIS final project.

For my final project for a GIS1 class, I worked with two Chinese students, and we decided to evaluate the location of hurricane evacuation centers in Manhattan. One of the members was extremely skilled at design and GIS, and the other at writing. I came up with the original idea for the topic, we were able to discuss and brush up our theme and method of analysis together. I contributed by learning R, a programming language, and created an interactive website showing a map using our GIS output. When I proposed using R to the professor at the early stage of the project, she advised against it, saying that it was too advanced for an “Introduction to GIS” class. Furthermore, I must confess that I had very little programming experience until then. However, with the other two members being so skilled at what they did, I wanted to challenge myself as well. It turned out to be successful, and many of our classmates complimented us at our final presentation.
Of course, things did not go so smoothly from the beginning; since the other members were Chinese, at first they sometimes used Chinese when talking with each other, even in my presence. Although I was bothered this, at first I pretended not to notice, since I understood that discussing in English was difficult for them. However, as time went on I decided to take a chance and asked one of the members to use English when we were meeting as a group. I was careful to not show that I was annoyed, but to explain that I felt left out when I did not understand the conversation. She understood immediately, and did not seem offended. From then on, they took care to use English at all times, and I would sometimes try to learn Chinese from them.
This GIS project proved to me that successful group work can trigger each member to push their own boundaries, and create a better output as a whole. It also taught me that being honest, as long as it was phrased carefully and with good intentions, was better than trying to ignore what was happening and giving up improving the situation. I am extremely thankful for having had this experience. 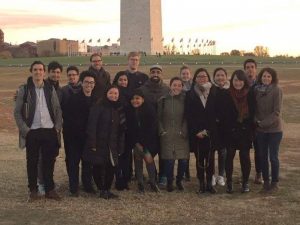 With my “Introduction to International Development” class, on our trip to Washington DC to visit the Inter-American Development Bank.

Another change I went through during the semester is that I became more interested in Japan, strange as it may sound. Perhaps being among classmates of other nationalities reinforced my identity; providing a Japanese perspective was one of the main ways I could contribute to the discussion, and when I did, I was thankful that I had a unique background. Our professors encouraged us to utilize our uniqueness as well; For the final essay for my “Introduction to International Development” class, I analyzed the 2011 Great East Japan Earthquake using a theory proposed by a scholar called Mark Pelling, which we had covered in class. I had done research on the earthquake as an architecture student before coming to the States, and used my knowledge I gained during that period. In addition, this new viewpoint enabled me to entirely reconstruct the disaster adaptation activities from a theoretical point of view, and gave me a better understanding of the event from a planning perspective.
I myself was surprised with this second transformation. I applied to Columbia with an interest in studying urban planning in developing countries, but now I have a more Japan-oriented focus. I am looking to gain work experience in Japan over the summer, and am considering returning to Japan upon graduation to work as an urban planner.
With the spring semester coming up, I look forward to seeing how much more I can transform. I am especially excited about an Urban Planning Studio, another group project, entitled “Designing a New Master Plan for Chinatown”. We will be presenting for a real client, the borough president of Manhattan. I started research on the NYC Chinatown over the winter break, and was amazed at the complexity and dynamic history of the area involving immigration, mix of different cultures, and politics. I am also looking to further broaden my scope by taking classes outside my expertise, such as ones using other programming languages as well as classes from the Real Estate program to learn about the financial side of the urban environment.
In closing, I would like to sincerely thank the Ito Foundation U.S.A. and Friends of UTokyo, Inc. Without their support, I would not have been able to allocate so much time and energy on my studies at Columbia. I will always acknowledge the fact that what I have the privilege to experience is made possible by the generosity of a number of people, and hope to someday give back what I received through my future work in the field of urban planning.
Footnote
—
1. Geographic Information System, a software used by urban planners to conduct information mapping and spatial analysis
Facebook0
Twitter0
Google+0
LinkedIn0
Pinterest0
FUTI 奨学金