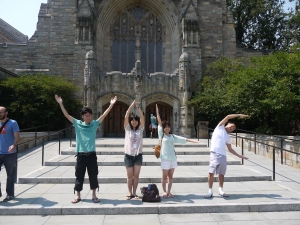 This summer, I participated in the Intensive English for College Students course at Yale University English Language Institute.
The program had morning classes and afternoon classes. In the morning, we took three classes: Reading and Vocabulary, Expository Writing and Conventions of Written English, and Speaking and Listening Skills.
Students were divided into some classes based on their English level. In my reading class, we read a short story every day and discussed about it. In the writing class, we wrote essays and learned how to write a correct English essay. The contents of speaking classes differed according to the classes. In my class, we did presentations, watched a movie, and learned about American Idiom. 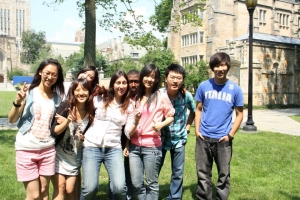 The participants could choose two afternoon elective classes. I took TOEFL preparation class and New Haven Experience class. In TOEFL preparation class, we learned about the strategies to take a high score in TOEFL. The teacher did whatever she could for her students and we could ask her to assign additional homework according to our own needs. In New Haven Experience class, we visited many places in New Haven. For example, we went to some museums, a church, and the city hall of New Haven. It was good that I could see a lot of things that I would not have seen if I did not take the class. 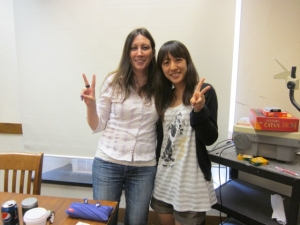 The program was six weeks long. This was my first time to spend such a long time talking in English. As a result, my hesitation when I speak English improved a lot. In addition to that, I got used to thinking in English. In Japan, when I speak English, I always think in Japanese and speak after I translate it into English. However, it takes time. Through the program, in the class discussion or conversation with my friends, I had to reply to comments quickly. Therefore, I gradually became able to think in English, without a process of thinking in Japanese, at least in simple conversations. This is a very meaningful achievement to me because one of the aims in my participation was to develop my speaking skill.
In my course, most of the participants were from China, so I spent most of the time with these Chinese students. We talked about many things: each other’s school, culture, language, or future. Since the relationship between China and Japan sometimes becomes very nervous, I think it was very good that I could make many nice friends with Chinese people, who prevent me from being caught in prejudice or stereotypes.
I learned about a lot of things this summer, which were not limited to English. I appreciate this valuable opportunity.
Facebook0
Twitter0
Google+0
LinkedIn0
Pinterest0
FUTI 奨学金