by Motoka Fukui
—
The experience which I gained this summer is no doubt a priceless and special one. This was my first time to study abroad, and I had never had a chance to use English in a practical way before. My motivation to this challenge was just wanting to tackle something unfamiliar in an unfamiliar place with unfamiliar people in order to test my own ability. And I could be able to say the purpose was accomplished. 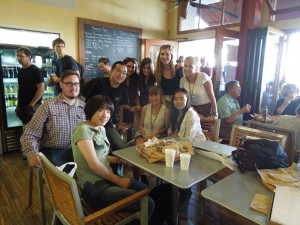 Group photo at a cafe

The course I took was separated in two parts: one was a lecture and the other was a workshop. The first thing I was bewildered with was the atmosphere of the classroom. In both parts of the class, students can raise their hands freely and show their own opinion, which was not necessarily related to what the lecturer said, and sometimes was just a short story which he/she recalled from some word of the teacher, then even an argument about it was occurred once.  In Japan, this situation can be regarded as disturbing a lecture, and a professor will try to get back to talking about the main point. At Berkeley, however, the teacher would not cut off the students’ controversy and even looked as if enjoying it. In my own case, I was feeling extremely frustrated by myself. Because the speed of their talking was fast, the words they used were what I did not know, and their pronunciations were not typical American styles, it was difficult for me just to catch the whole meaning. I also found considerable difficulty in constructing my opinion in English while hearing English spoken by others. In this condition, it was impossible for me to cut in the discussion. Later in the course, I finally succeeded to speak out my own thought, but still strongly felt nervous. I never felt such a fair sense of inferiority to others in my life, so this experience indeed inspired a feeling of enthusiasm to make success in other countries.
The thing I was surprised by in a good sense was the evaluation by the lecturers. Each student could obtain the evaluation for his/her mid-term assignment. This fact alone deserves special mention, but the content of the evaluation paper which was really detailed was a new experience for me. It suggested good points, bad points, lacking points and introduced what I need to do next or how I can revise my thesis. Thanks to that, I could notice my habit in writing and even find that the process of thinking in my head is completely different in Japanese and English. This problem can be the biggest one. I can put my idea into writing if the task is short or the amount of reference is small, however, it is so difficult for me to compose more academic and complex concept that it takes double work thinking in Japanese and translating into English. Only after I constructed the whole structure of my opinion more precisely than composing Japanese sentence, could I start writing in English. Otherwise, it is easy to lose the way of conceptualizing. I felt other frustration of my disablement at this point. 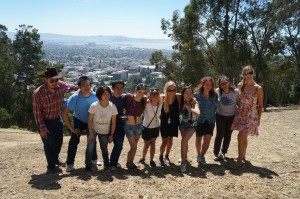 Inside and outside class, my new friends were really collaborative at every moment. Everybody was really open to becoming friends. Living in the same dormitory, we had already shared something. We still keep in touch with each other and promise to each country and meet again. Of course I needed to break out of my own shell and become more active to communicate with these individualistic friends from every different background. This was really the best way to develop my socializing skills and improve my English ability, both of which cannot be obtained automatically only you were in English-speaking world.
Before experiencing this summer, I was vaguely hoping to study abroad after graduation from college. However, now I can understand it was just an admiration toward different culture. What I need first in order to go to the next step is building a steady foundation for my study, which will not be changed by language difference etc. The biggest benefit of this stay is the awakening of my inadequacies and I made up my mind to challenge again as a more strengthened self.
Finally I thank everyone who gave me the possibility of this marvelous experience.
Facebook0
Twitter0
Google+0
LinkedIn0
Pinterest0
FUTI 奨学金