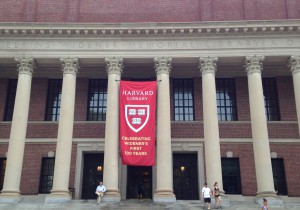 This summer, I participated in the Harvard Summer School for 7 weeks. I took two courses; one about cancer, and the other about imaging in biology. In the cancer course, I learned about biological phenomena concerned with cancer, such as cell signaling, apoptosis, metastasis, and angiogenesis. The mechanisms of all these phenomena, both the mechanisms that cause cancer and those that prevent cancer are very sophisticated. There are many causes of cancer, but basically, unexpected mutations in the gene lead to cancer. For example, if there is a mutation in a gene that regulates cell division, the cell might proliferate too much and form a tumor. Another example is a mutation in a gene that cause apoptosis (programed cell death), and this might prevent apoptosis. This would result in the emergence of immortal cells, which would continue growing and dividing out of control. Not only mutations, but there are many other ways that make a cell cancerous. In our bodies, some proteins get rid of these abnormal cells using several methods, such as repairing DNA damage or inducing apoptosis. When the influence of the factors that cause cancer exceeds the capacity of our anti-cancer system, we develop cancer. There are many things going on in cancer cells, and it was very interesting for me. 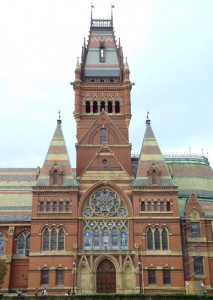 In the imaging in biology course, I learned about the nature of light, how microscopes work, and the feature of each type of microscopes. There are many types of microscopes, and each microscope have advantages and disadvantages. We have to choose the most suitable microscope when we observe organisms. In this class, we had a lab class in Harvard Medical School every week, and we actually used the microscopes and did some analyses too. The professor taught us how to operate the microscopes and the way to use the software to analyze images. It was very exciting to see the image of various organisms, and I am sure that the knowledge I acquired in this course would be useful in many occasions. 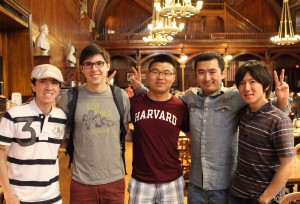 In the Summer School, I met a lot of people from all over the world, and I really enjoyed interacting with them. Sometimes we exchanged opinions about political issues, and sometimes we talked about cultures. I was surprised that many people knew well about Japanese culture, such as animes, samurais, and ramen. I was happy when my friend bought a Totoro T-shirt and wore it to school.
It was a good experience to spend time without Japanese (I only met one Japanese high school student in the Summer School). In Japan, since everybody around me is Japanese, I don’t think deeply about my own country or culture. By putting myself in a foreign country and being a minority, I was able to recognize the good points and bad points of my country. For example, I realized the security of my country. Hearing the story of other countries, I thought that Japan is much safer than other countries. Many friends were surprised when I told them that elementary school students play in the park without their parents in Japan. On the other hand, I thought foreign people are much better at socializing than Japanese. Many people were curious about me and my culture, and they tried to interact with me. In Japan, not many people make an effort to interact with strangers. I myself usually don’t talk with strangers, but in the Summer School, I tried to talk with many people, and it changed my view of the world. I think Japanese should try to interact with more people, because meeting new people would enrich one’s life.
The Summer School made me think of studying abroad for graduate school. I am going to study English and biology harder so that I can study at a foreign graduate school, and become a biologist in the future.