Author: Shig Matsushita
(This is a partial translation of the original article written in Japanese.) 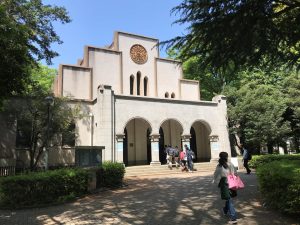 The eighth annual “Go Global University of Tokyo Study Abroad Fair” presented by the Division for Global Initiatives was held on April 21 at the Komaba Campus. The goal is to promote and support study abroad programs, to advocate the importance of cultural exchanges and studying overseas, and to help initiate the planning process for the study abroad early on in the undergraduate years. The following is a report of my participation in this Fair.
There were about 550 participants which include parents accompanying their child, or oddly enough in some 30 or 40 cases, parents alone without the student. Having 550 participants seems to be a successful event but considering that each class consists of about three thousand students at UTokyo, it only amounts to slightly less than ten percent of the student body on the Komaba campus. Although it was a weekend, it is still a little disappointing that only less than ten percent showed interest in the study abroad event.
The event was an all-day affair lasting eight and a half hours divided into three sessions. The morning 75-minute session was an orientation meeting held in classroom Number 900, formerly a First Imperial High School (Kyuu Ikko) auditorium. The afternoon session which lasted five and a half hours gave participants the opportunity for private consultations at individual booths set up by supporting organizations including FUTI. During this same time, an orientation meeting was held at a separate location for students about to go on a study abroad. The Fair concluded with a social gathering where participants can mingle over a light meal and beverages with students who have either returned from or are about to embark on a study abroad through the International Exchange Group.
[Orientation Meeting] 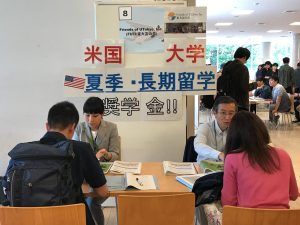 The meeting began with a greeting from Prof. Yujin Yaguchi who was appointed Director of the International Education Support Office in April and is the key person to spearhead the University of Tokyo’s globalization efforts. He continues to teach English and American Culture courses even after assuming the directorship and has shown leadership throughout UTokyo, starting with the establishment of PEAK (a four-year program of courses taught entirely in English on the Komaba Campus) and integrating Komaba’s third and fourth year undergraduates and graduate students as if they were in an independent international relations college.
The professor emphasized the following point. What began as almost a whim to do his graduate studies at a U.S. university ended up being a life-changing experience beyond his expectations. The environment he was used to in Japan which he had taken for granted as the same everywhere else was not the same at all. He discovered the many facets of America through the exposure of cultures, ethnicities, and perceptions he had never encountered before, and learned a great deal by immersing himself in that environment. This experience created the person that he is today. His wish is for everyone to have these experiences early on.
[Individual Consultation Sessions]
The entire afternoon was dedicated to individual consultations at booths. FUTI was one of the 24 booths set up. There was a desk manned by a few staff members from the Go Global Center who answered general inquiries or inquiries from newcomers and guided the participants who had more specific questions to the appropriate booths. The booth next door was hosted by UTokyo students who have study abroad experience and current UTokyo students who are from overseas. Other booths included those that bring back fond memories for me as a recipient years ago such as the Japan Student Services Organization (JASSO) and the Fulbright Program. (Currently the Fulbright program receives additional support from both the government and corporations in the U.S. and in Japan because the annual appropriation alone cannot sustain the program). There were also organizations representing the UK, France, and Germany, and representatives from universities in the UK, France, and South Korea. Next to FUTI was a booth run by an organization called the Schwarzman Scholars which was founded by an American named Mr. Schwarzman and promotes exchanges between China and the U.S. Their program which featured a generous offering of a fully sponsored one-year master’s program at Tsinghua University, trips within China, a computer, and a smartphone, apparently draws 4,000 applicants each year from around the world, of which only 140 are selected. It seems a waste of a fantastic opportunity since there were not that many visitors at the booth.
Although I was present at the FUTI booth, we were fortunate to have Mr. Jun Sato and Ms. Hazuki Kase from the Office for External Relations (the Shogai Bumon) office take care of most of inquiries. The booths with the most traffic seemed to be FUTI and GEfIL. FUTI has reached a new record of 62 visitors to come and consult at the booth this year. Many of the students started with questions such as “What is FUTI?” or “What are the conditions for repayment?” but some had done their research ahead of time and had inquiries about details such as the selection process. For FUTI, this Fair was an important PR activity.
Since many of the visitors were first-timers, there was a good deal of interest in how one can go about doing a study abroad. It is wonderful that UTokyo’s study abroad support system addresses this very question in full force. FUTI’s role in UTokyo’s system is to fill in financial gaps and to cover those that are difficult to be supported through the existing system alone. Those that cannot be covered by the UTokyo’s study abroad system could include 1) those wanting to attend a study abroad program that does not fit with UTokyo’s scheme; 2) those who have gone on to study overseas after graduating from UTokyo; 3) other UTokyo graduates/alumni; 4) doctoral candidates; 5) those who benefit from a more subjective evaluation beyond just their grades such as on their ambitions and goals, leadership, and recommendation letters; 6) special additional support for outstanding students; 7) support for a second year in a row; and 8) American students who would like to study at UTokyo.
＊Dr. Shig Matsushita is the Chair of Friends of UTokyo Scholarship Committee.