Go Global 2017, a fair to encourage UTokyo students to study abroad, was held at the Komaba Campus on April 15 (Sat), 2017. The objectives of the Fair are to convey to UTokyo students the importance of studying abroad and experiencing different cultures, and to motivate and help them consider overseas study opportunities in the early years of their undergraduate studies. This is the seventh year since this annual fair was introduced in 2011.
There were slightly over 300 attendees this year compared to approximately 300 in 2015 and 450 last year. The plenary session program included a greeting by Vice President Shigeto Sonoda and Ms. Maiko Yoshida of Global Business Planning Department, DISCO Co., Ltd. followed by a detailed explanation of UTokyo study abroad programs by the International Affairs Department staff and “Study Overseas Briefing Session (Summer Program)” given by UTokyo students who have experienced study aboard programs.
<Professor Sonoda’s Greeting>
Dr. Shigeto Sonoda, Vice President, and Professor in the Interfaculty Initiative in Information Studies gave an opening greeting. It had more substance compared to opening greetings in recent years. Highlights of his messages are shown below.
“As recently as ten years ago UTokyo was not active in encouraging students to study abroad. This is negligence on the part of the university. Some years ago, merely by translating Western studies, we were able to provide the best education in Japanese. However, as Asia has become a major power and the dynamics of the global economy has changed, our global environment has radically altered. As a result of the globalization of the economy it has become impossible for us to remain effective by working in the traditional mode.
For example, I have just received a call from the University of California at Berkeley asking us to accept 15 students from the university to study at the University of Tokyo, which I was happy to accept. As globalization progresses, universities around the world compete for networking. Students, do not sit back or being complacent. I urge you to globalize yourself as soon as possible. ”
<Keynote Speech, by Ms. Aiko Yoshida, Global Business Strategy Section of DISCO, Inc.: “Studying Abroad and Employment”>
DISCO has become well-known as the organizer of the Boston Forum, which matches employers and Japanese students studying abroad. It has lately extended its scope to forums in eight cities in five countries, such as San Francisco and Los Angeles. More recently, DISCO has begun to offer services to non-Japanese students who desire to study in Japan. A summary of Ms. Yoshida’s speech is shown below.
The Japanese economy has ceased to grow rapidly and cannot hope for vigorous growth unless you do business in the world especially in Asia. Asia is multilingual, but English is a common language there. Businesses demand in employees much more than a good command of English. They look for ① those who can consistently demonstrate a high level of ability in any environment, regardless of domestic and overseas, ② those who have a high level of vitality and stress tolerance in difficult environments which was possibly developed during their study abroad, and ③those who excel in leadership, communication (including negotiation skills), and problem solving ability.
It is expected that one improves English by studying abroad so that companies/employers are not impressed by a good command of English per se. Instead they are eager to find out how a student improved his English through “Plan-Do-See” and how he is likely to utilize the experience in the problem solving at work. It is the demonstrated evidence of vitality that companies look for in students.
<Individual Consultation Booth of FUTI> 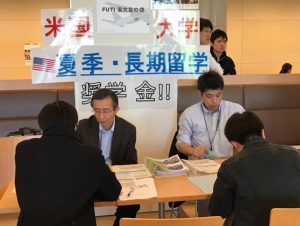 In addition to the plenary session, individual consultation was held at booths of 20 so participating organizations, including FUTI, at the Komaba Communication Plaza from 12:30 to 5:30. During the five-hour period, approximately 300 students visited booths. Forty-seven students visited FUTI’s desk, which was nearly equal to 50 students last year. However, the ratio between men and women was different this year. Last year, nearly half the visitors were women, but this year there were only nine, or about 20%. The underrepresentation of women was also observed about the participants of the Go Global Fair.
FUTI’s booth was manned by Mr. Sato and Mr. Ito of the Division of Development. Using the FUTI annual report and materials on FUTI’s summer leadership program and Ito USA Foundation-FUTI scholarship program, they answered students’ questions. The nature of students’ interest varied; some are vaguely interested in studying abroad, while others have concrete plans of applying to universities.
Note: This article was written by a FUTI staff using the information from a FUTI colleague who participated in the Fair.