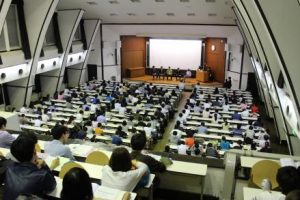 “Go Global 2016,” a fair to encourage UTokyo students to study abroad, was held at the Komaba Campus on May 27th (Fri) and 28th (Sat), 2016. The objectives of the Fair are to convey to UTokyo students the importance of studying abroad and experiencing different cultures, and to motivate and help them consider overseas study opportunities in the early years of their undergraduate studies. This is the sixth year since this annual fair was introduced in 2011. 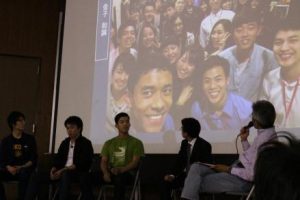 The plenary session for general information was held on the first day attended by about 450 students. On the second day, individual counseling sessions were provided by representatives from various departments and divisions of UTokyo, foreign governments’ affiliated organizations, and NGO/NPOs (both domestic and abroad). Approximately 300 students attended the sessions on the second day.
In the plenary session, Mr. Shigeto Sonoda, Deputy Head of the International Division of UTokyo, gave a welcome speech followed by a talk by Mr. Yoshiaki Fujimori (Chairman and CEO of LIXIL, Inc.) He discussed the influence of his study abroad experience on his life and career, utilizing his own overseas study experience as an illustration. His lecture was followed by a panel discussion by students who had studied abroad.
For the counseling sessions, 26 organizations including FUTI set up booths. They answered individual inquiries and gave advice to visitors. For the first time, individual counseling sessions included presentations by participating entities. Some parents of students participated in the second day session perhaps because it was held on a Saturday. With a large number of visitors keenly interested in study abroads, the Go Abroad 2016 was a huge success. 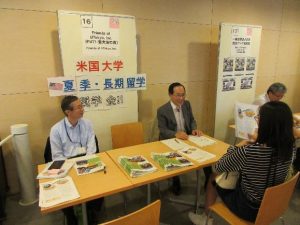 The FUTI booth was visited by about 60 students during the four and a half hour period and was represented by the Hongo Campus Development Division Senior Director, Mr. Atsushi Sato; Staff Member, Mr. Tomohito Mitome; and FUTI Board Member, Dr. Shigenori Matsushita. Students seemed to find certain features appealing about FUTI such as the warm support coming from UTokyo alumni in America and the fact that there is freedom in selecting the foreign university of their choice. These extra benefits on top of financial support set FUTI apart from the other organizations. Additionally, the Ito Foundation USA-FUTI Scholarship which supports study abroad spanning one semester or longer seemed to attract many students who find it hard to participate in a summer program under the new four-quarter system. 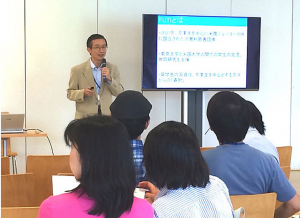 Those representing FUTI received a variety of comments and questions such as, “ Because the amount of FUTI Scholarship seems generous, I will seriously consider it,” and, “What are the selection criteria? Is the application/selection process competitive?”
The Development Division staff report that more than 80% of participating students are freshmen or sophomores on the Komaba campus. Their interest in the Fair appears to indicate that the University’s policy which encourages more students to gain international experience, has begun to permeate among the UTokyo students. “The number of UTokyo students with serious interest in study abroad appear to have definitely increased over the last several years,” commented Mr. Sato.
The following is a list of the 26 organizations/units that set up counseling booths on the second day.