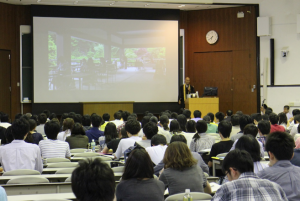 “Go Global 2015,” a fair to encourage UTokyo students to study abroad, was held at the Komaba Campus on June fourth (Thu) and fifth (Fri), 2015. The objectives of the Fair are to convey to UTokyo students the significance and importance of studying abroad and experiencing different cultures, and to motivate and help them to consider overseas study opportunities in the early years of their undergraduate studies. This is the fifth year since this annual fair was introduced in 2011.
The plenary session for general information was held on the first day. On the second day, individual counseling sessions were provided by representatives from various departments and divisions of UTokyo, foreign governments’ affiliated organizations, and NGO/NPOs (both domestic and abroad). In total, approximately 350 students attended the two sessions. 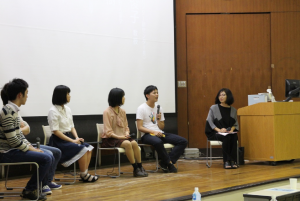 In the plenary session, Dr. Ken Furuya, Executive Vice President of UTokyo, gave a welcome speech, followed by a talk by Reverent Shokei Matsumoto of Jodo Shinshu Honganji Sect Komyoji Temple. In his lecture titled, “Plunge into the World (sekai he no shukke),” he discussed study abroad and career development, utilizing his own overseas study experience as a base/illustration. His lecture was followed by a panel discussion by students who had studied abroad.
For the individual counseling sessions, 34 organizations, including FUTI, set up their booths, answered individual inquiries and gave advice to the visitors. 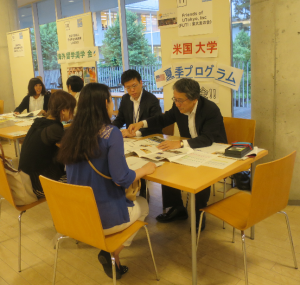 FUTI’s booth was visited by about 50 students during the three and a half hour period. Mr.Yoichi Yoshida (Deputy Head), and Ms. Azumi Tezuka and Mr. Tomohito Mitome (staff) of the Development Division at the Hongo Campus represented FUTI. Ms. Tezuka and Mr. Mitome report, “We were impressed that a sizable number of freshmen showed interest in gathering information about studying abroad, getting ready for future.” Their interest appears to indicate that the University’s policy, which encourages many students to gain some international experience has begun to permeate among the UTokyo students. “UTokyo students’ awareness has certainly changed over the last several years,” commented Mr. Yoshida.
The number of students who visited FUTI’s booth increased from approximately 30 last year to 50 this year. They appear to recognize a feature of FUTI that ‘Alumni are supporting UTokyo from America’ and find appealing the FUTI provision by which students select the foreign university of their choice. These are considered an extra merit in addition to financial support.
The Development Division staff received a variety of comments and questions such as “The amount of FUTI Scholarship seems generous so I will seriously consider it,” and “What is the selection criteria? Is the application competitive?” Reflecting UTokyo’s transition to the four-term system which makes it difficult to participate in summer programs, many students also asked questions regarding FUTI support for one-year study abroad programs or a winter program.
The following is a list of the 34 organizations/units that set up the counseling booths on the second day.