Pang, Tiffany
Yale University
—
FUTI International Leadership Award Recipient 2011
This year marks my second time in Tokyo and the first with the Global Summer Program. Last year, I had studied Japanese media through the Yale Summer Program at Waseda University. While I had learned a great deal about Japanese anime, manga, and culture last year, I had a new opportunity this year: to collaborate with top students from universities all around the world and
discuss issues ranging from Japanese culture to our own countries’ politics. Through the Global Summer Program, I took three courses (Introduction to the Japanese Language, Nanoscience, and Japan in Today’s World) and, through these courses, I had the chance to learn more about Japanese history, culture, politics, and recent science developments. More importantly, I befriended people from around the world and learned from them new ways of thinking about politics, culture, and more.
In my Introduction to the Japanese Language course, I learned a great deal of conversational Japanese and Japanese grammar. By the end of the course, I had learned enough to hold my own in basic Japanese conversation. I particularly enjoyed our lesson asking teachers what they had for breakfast and interviewing one another. The conversational practice put the lesson we had just
learned to practical use and made the experience more organic. Moreover, I was particularly impressed with how much Japanese I had learned—and remembered—in less than two weeks. The streamlined lessons had engrained in me a basic foundation for learning Japanese and had given me the confidence to continue learning the Japanese language on my own in the future.
Studying Nanoscience at UTokyo gave me a taste of how nanotechnologies have progressed in the past decade. Learning from and interacting with professors who are at the forefront of cuttingedge research in overcoming the physical limits of miniaturization of transistors has been an eyeopening experience. Though my background is in neuroscience research, since learning about
recent advances in bioengineering, I have a newfound appreciation for science. In particular, Professor Yuichi Tei, who studies regenerative medicine, has found a way to optimize regenerative properties of artificial bone through physical changes in the basic scaffolding units. The simple but effective methodology and way of thinking reminded me of an Occam’s razor-like complement to
current research in biological signaling in improving regenerative properties in artificial tissue—and, more importantly, reminded how wonderfully creative research is.
I was also fortunate enough to be able to take part in the course on Japan in Today’s World and engage in thought-provoking debate and discussions with students with varying perspectives. The course was particularly relevant and interesting in light of recent tragedies in the Tohoku region in Japan. Learning about Japan’s perspective on international perspective of Japanese politics was particularly engaging in that it motivated all the students to speak about their own experiences in and outside Japan. Having grown up in America and having taken courses in political science at Yale, I was particularly interested in hearing what students in other countries thought about issues of human security and social issues in Japan and contributing my own pieces on the topic. From this experience, I have learned to appreciate how each of the students’ countries’
histories and the histories of countries in general play out in their perception of global affairs—and I look forward to participating in future study abroad experiences to listen and share stories and experiences with other international students.
Through this program and with the help of the FUTI International Leadership Award, I made friends with people I would otherwise have never meet and gained new ways of thinking about science, politics, and international relations. The merits of studying abroad cannot be applauded more; the chance to engage with different people and perspectives was an enriching experience I would not soon forget. And for those who are thinking about studying with the Global Summer Program, I have only this to add: This was the best summer ever! 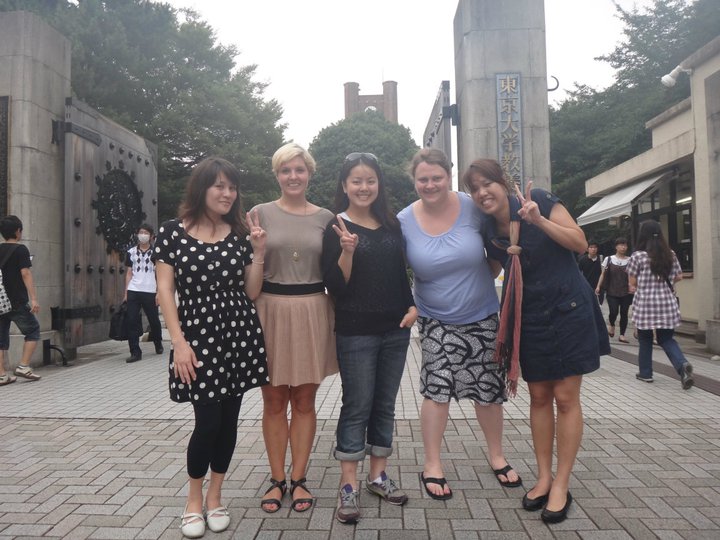 Tiffany Pang, center, in front of the gates of Tokyo University.