Giving Back to the American People: Dr. Matsushita receives Distinguished Alumni Award from the University of Illinois 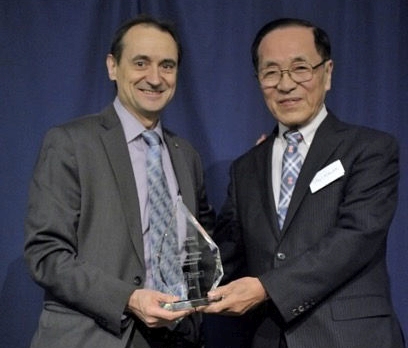 This past October, FUTI’s director, Dr. Shigenori Matsushita, received the 2019 Distinguished Alumni Award from the Computer Science Department of his Alma Mater, the University of Illinois. He received the same award from the Electrical Engineering Dept. four years ago. He is one of the “Computer Pioneers of Japan” as designated by the Information Processing Society of Japan.

Dr. Matsushita graduated in 1959 with a Bachelor of Science degree in Electrical Engineering from the University of Tokyo and worked for Toshiba as a computer design engineer. Although he was encouraged to go to graduate school and desired to do so himself since computer science was not taught on the undergraduate level at the time, he had to decide not to, thinking that he could not afford it.   Japan was an impoverished nation after the Second World War when even the first salary at Toshiba was ¥12,500 or $35 a month. As chance would have it, he found out that although he could not afford the graduate study in Japan, he could study in the US by taking advantage of the half-time assistantship. Fortunately, the famed Digital Computer Laboratory at the University of Illinois (U of I) offered an assistantship for $200 a month allowing him to attend a computer sciences degree program in the Electrical Engineering Department at the master’s level. At this time, only the Digital Computer Laboratory existed and the Computer Science Department has not been established yet. During the one-year leave from 1962 to 1963 which he petitioned Toshiba for and was granted, he was able to fulfill the minimum requirements for the master’s degree at the U of I.  He was also assisted by the Fulbright scholarship, created by Senator Fulbright. Shig felt, and still feels very much obliged to the US and the American people for enabling his advanced study entirely by means of American money, without which his study of computer sciences would have been impossible.

Much later in the 1990’s he worked for a start-up company in Silicon Valley. Five years later in 1999, stock options grew to, in his opinion, a sizable amount of money. Again, this was American money coming from American investors. Matsushita felt that he should repay the US and the American people for the generosity extended to him when he was very poor, and discussed this with the late Professor Saburo Muroga of the Computer Science Department, University of Illinois. As Professor Muroga was planning to retire, he and Matsushita jointly established a fund, the Saburo Muroga Endowed Fellowship, which to this day still continues 20 years later. The Distinguished Alumni Award was given to show great appreciation for this and other contributions to the department. In addition, Matsushita also donated to Stanford University, the University of Tokyo and the Sugiyama Scholarship Fund in Tokyo to express his gratitude.

As he still feels indebted to the US and the American people, he continues to contribute in the form of being a Director and Scholarship Committee Chairman of Friends of UTokyo, encouraging interaction between the two countries through scholarship programs awarded to qualified students at US universities and UTokyo who wish to study at UTokyo or academic/research institutions in the US, respectively.

Dr. Matsushita states, “Since the Distinguished Alumni Award is just one of many awards, it is not necessarily worth publicizing on FUTI News. Of course, personally, I feel extremely honored that in addition to the Distinguished Alumni Award given to me four years ago for my contribution to the industry through promoting better relationships between companies in the U.S. and Japan, I received an award a second time for my gratitude and repayment to the US through the fund established twenty years ago and through my contribution to FUTI today. It may be worth noting on the FUTI Newsletter that wise investment in our youth by means of scholarships, as FUTI is engaged in, will get results in the long run.”