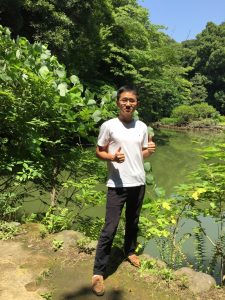 This summer, I participated in University of Tokyo’s Engineering Summer Education Program (ESEP). Starting late June, I worked at Dr. Yoshimura’s lab in the department of systems of innovation. Dr. Yoshimura’s lab mainly has two areas of study. One focuses on large scale traffic simulations and predictions, while the other on mechanical simulations of structures and fluids. Coming from a mechanical and computational mathematics background, I fit right in at the division which focuses on fluid and structure interaction (FSI) problems.

Over the span of six weeks, I worked closely with PhD student Shigeki Kaneko, who has been in UTokyo since his undergraduate years and is very experienced in the field of FSI. Prior to my arrival, my predecessors in lab and Kaneko san have completed an in-house simulation of swimming fin in fluids. Building upon the existing framework and interested in finding out what kind of fin movement will be considered optimal, I embarked on the optimization problem of this fin simulation. Specifically, I used genetic algorithm to find the optimal inputs to simulation which produce the most efficient fin movements. My research can be roughly broken down into four steps as follows. 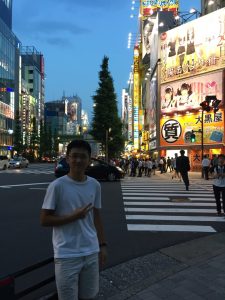 Gladly, by the end of my stay, I was able to obtain promising results and leave behind a framework for further developments.

I have gained more knowledge on physical simulations and honed my skills in programming through ESEP. But as someone who has a deep interest in Japanese culture, my learnings here have extended beyond pure academics. Every day, I enjoy causal conversations with my lab partners, often in a mix of Japanese and English. Curiously exploring the city, I have grown quite used to it: from someone easily flustered at the busy train stations to a self-acclaimed “local guide” for other international students on the weekends. During my stay, I also tried many different foods, exploring hidden restaurants in back alleys. Not just seeing the sights but also actually living in the city has given me a new perspective on the great city of Tokyo.

The summer experience at University of Tokyo has truly been transformative. I would like to thank Dr. Yoshimura for giving me the opportunity to join the lab and Kaneko san for helping with my research. I am also very grateful to FUTI for providing me the financial means to participate in this amazing program. I have great confidence in the future developments of ESEP and hope more people could join and learn through the help of FUTI!