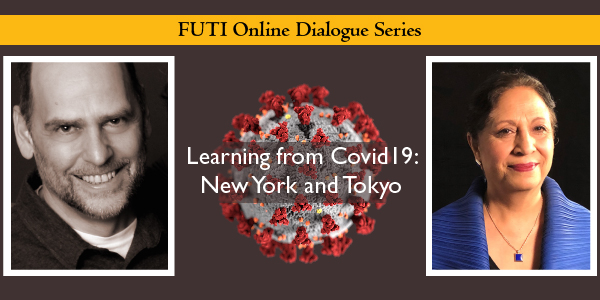 More than 40 alumni participated in the event. During the presentation and Q & A session, the audience asked many questions resulting in a lively exchange of opinions. Following the formal session, participants, many of whom were international alumni, stayed on for the after-session gathering and enjoyed each other’s company.

This is the inaugural event in a series created to bring together UTokyo international alumni in the US and others interested in FUTI’s work.

Covid19 infection and death rates have been very different in New York and Tokyo, the two mega-cities with among the highest densities in the world. While the two cities are not lacking in financial capital, could social capital be the reason for such different outcomes? The speakers will present their research and analysis of the possible answers to this and show how social capital is the essential wealth of communities in not only preparing for future health or climate shocks, but also in addressing the ongoing issues of social inequity and social justice.

Prof. Peter J. Marcotullio is Professor of Geography and Director of the Institute for Sustainable Cities at Hunter College, City University of New York (CUNY).  He is also Adjunct Professor of Urban Planning at Columbia University, Graduate School of Architecture Planning and Preservation (GSAPP).  Prior to 2006, Prof. Marcotullio was Lecturer (1999-2001) and Professor (2001-2006) of Urban Planning in the Urban Engineering Department, University of Tokyo and held several positions at the United Nations University, Institute for Advanced Studies, Japan (1997-2008).

Dr. Geeta Mehta is an adjunct professor at Columbia University and the founder/president of Asia Initiatives (asiainitiatives.org) where she developed Social Capital Credits (SoCCs), a community currency for social good that was recognized by Fast Company as the “World Changing Idea” this year. Geeta is also the co-founder of “URBZ: User Generated Cities” (urbz.net).  She has been recognized as One of the 21 Leaders of the 21st Century by Women’s eNews. She currently serves on New York Mayor’s Advisory Board for Waterfront Development, and several non-profit boards.