FUTI Lecture Series: Violinist Dr. Ray Iwazumi Presents an Informative and Entertaining Journey into the Advances in Technique, Musical Compositions, and Expressions in Violin Performance in the 19th Century 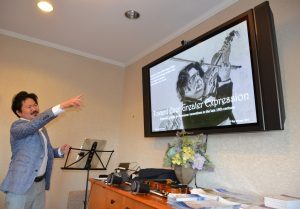 On May 11, 2017, Dr. Ray Iwazumi, delivered a 90-minute lecture and demonstration in New York—complete with virtuosic and insightful musical performances on violin—in a program entitled “Toward Ever Greater Expression (in Violin Performance): Innovations in the Late 19th Century.”
Equipped with a large-screen PowerPoint presentation and his own prized 18th century violin made by the luthier Nicolas Lupot, considered to be the Antonio Stradivari of France, Dr. Iwazumi led the audience of some 30+ guests and friends through the evolution of violin performance aesthetics during the mid to late 19th century. Ornamental violin techniques such as vibrato and portamento (the “scoops” and “slides” between notes) advanced from the beginning of the 1800’s when the violin titans of the period, Rodolphe Kreutzer (1766-1831), Pierre Baillot (1771-1842) and Pierre Rode (1774-1830) “laid out influential principles that were almost iron-clad through at least the first half of the 19th century,” Dr. Iwazumi explained. 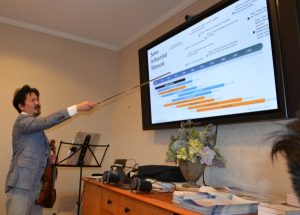 Dr. Iwazumi, who completed his B.M., M.M. and D.M.A. degrees at The Juilliard School, was also awarded the Richard French Prize at Juilliard where he studied with renowned violin pedagogues Dorothy DeLay and Hyo Kang. He also completed two master’s degrees awarded “with highest distinction” in violin and chamber music at the Brussels Royal Conservatory under the guidance of Igor Oistrakh, the son of the legendary Russian violin virtuoso David Oistrakh.
His lecture presented an analysis and a recorded violin performance of the great Belgian violinist Eugène Ysaÿe (1858-1931) playing Brahms’ famed Hungarian Dance No. 5. Dr. Iwazumi also gave a performance of music by Niccolò Paganini (1782-1840), and Fritz Kreisler (1875-1962) of which he played Kreisler’s celebrated Recitativo und Scherzo-Caprice, Op. 6, which the composer dedicated to his master and friend, Ysaÿe. The presentation also included musical analysis and demonstrations of scores by Rodolphe Kreutzer, Ferdinand David (1810-1873), Charles de Bériot (1802-1870), and Henri Vieuxtemps (1820-1881). In each of these performances, the audience witnessed the further development of expression, advancing violin techniques and complex musical ideas as Dr. Iwazumi demonstrated flawlessly.
Somewhat of a musical historical postulate was achieved when Henryk Wieniawski (1835-1880) established his reputation in what Dr. Iwazumi described as “the Jimi Hendrix of the violin world.” Dr. Iwazumi’s performance of Wieniawski’s “Le chant du bivouac” from the L’École Moderne, Op. 10, was filled with blistering clusters of three- and four-note violin chords and double-stops (two notes) fused with unrelenting rhythmic vitality. The performance was a tour de force.
The lecture, which began at 6:30 pm, came to a rollicking conclusion of laughter and wonderment when Dr. Iwazumi was able bring sound with his violin performance to a purely visual segment, sans audio, of Ysaÿe bowing through one of his own great violin compositions. It seemed we were all witnessing a musical “handshake” taking place “live,” some 100 years apart. (Dr. Iwazumi, in fact, cataloged rare materials and manuscripts related to Ysaÿe at Juilliard, remains an editor and music research consultant, and is on the school’s faculty.)
During the Q & A session, the audience continued to probe the relationship between culture, fashion, composition and performance, resulting in a lively exchange of opinions, theories and speculation about the ever-evolving art of the violin. While Dr. Iwazumi lamented the passing of the golden era when violinists composed their own music – as demonstrated by Paganini and the great violinists discussed in the lecture—he hoped to see a return to the day when a great virtuoso violinist and composer will again be one in the same.
Written by George Drapeau III
About the author: George Drapeau is a dedicated violinist, violist, student of Dr. Iwazumi and chairman of the St. Thomas Orchestra.
http://rayiwazumi.com
http://www.friendsofrayiwazumi.com