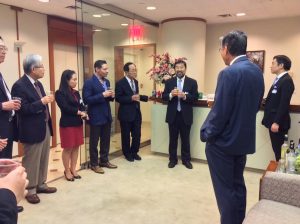 On Saturday, October 1st, Friends of UTokyo, Inc. (FUTI) hosted a reception to express appreciation for its supporters.
Following the opening remarks by Dr. Masaaki Yamada, president, Mr. Shigenori Matsushita, a board member, made a report on the activities of FUTI. After explaining that FUTI provides research grants and scholarships to researchers and students aiming to attain international leadership, he reconfirmed FUTI’s commitment in this area.
Dr. Matsushita commented that while globalization is more important than ever for the University of Tokyo (UTokyo) community, a concern has been expressed that its students are not actively participating in summer and other programs abroad such as those in the United States. However, FUTI’s scholarship recipients have reported that, overcoming language and cultural differences, they have not only expanded their friendship network but also grown as a person. He concluded his remark saying that FUTI is committed to working harder to support students who aspire to study abroad.
Dr. Fumiko Tamura, board member and certified public accountant, gave an accounting and financial report of FUTI. For details, please click here. 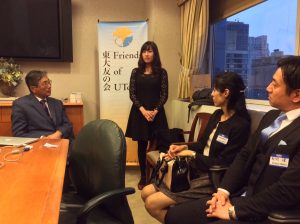 Following these presentations, FUTI scholarship recipients, Eri Furusawa, Ayako Yamashita, and Minami Goto, reported on their university lives in the U.S. and expressed their gratitude to FUTI supporters. For example, one said “I am learning a great deal while being stimulated by students from all over the world at the graduate schools in New York.” Another commented, “When we have no relatives in the United States, FUTI has provided us with not only economical but also psychological support.” Reflecting on his own graduate student days, Dr. Yuichiro Kuwama, a board member, responded to these comments: “I would like to contribute to the creation of a better world by economically supporting the students who are studying under financial hardship, as I did myself in my student days.” He also commented, “By observing the scholarship students gain a positive experience, their younger schoolmates may start thinking, ‘If they can do it, maybe I can also undertake the challenge of studying abroad.’ A creation of such a positive ‘circular sequence’ would be ideal.”
Finally, Dr. Ken Furuya, executive president of the University of Tokyo discussed the present situation and globalization of the University of Tokyo, in a presentation entitled “UTokyo Vision 2020″ (The University of Tokyo Vision 2020). It is the action/policy guidelines presented by President Gonokami for his five-year term through 2020. It explains the university’s vision regarding four pillars, “research”, “education”, “collaboration with outside society”, and “university management” as well as action plans in the context of its mission to become “a global center of intellectual cooperation and creation.”
UTokyo’s current initiatives that closely relate to FUTI’s programs include 1) the introduction of the 4-term system, 2) the expansion of the international exchange programs that can be implemented at a low tuition cost, and 3) the financial support of students by FUTI, and other entities. Dr. Furuya said, “We are attempting to develop a structure in which UTokyo students can attain a global perspective by going back and forth between the university and abroad.” He concluded, “Although the full-scale globalization effort has just begun at the University of Tokyo, its international competitiveness will certainly increase thanks to support by not only its headquarters’ effort, but also its students’ strive and alumni’s strive.”