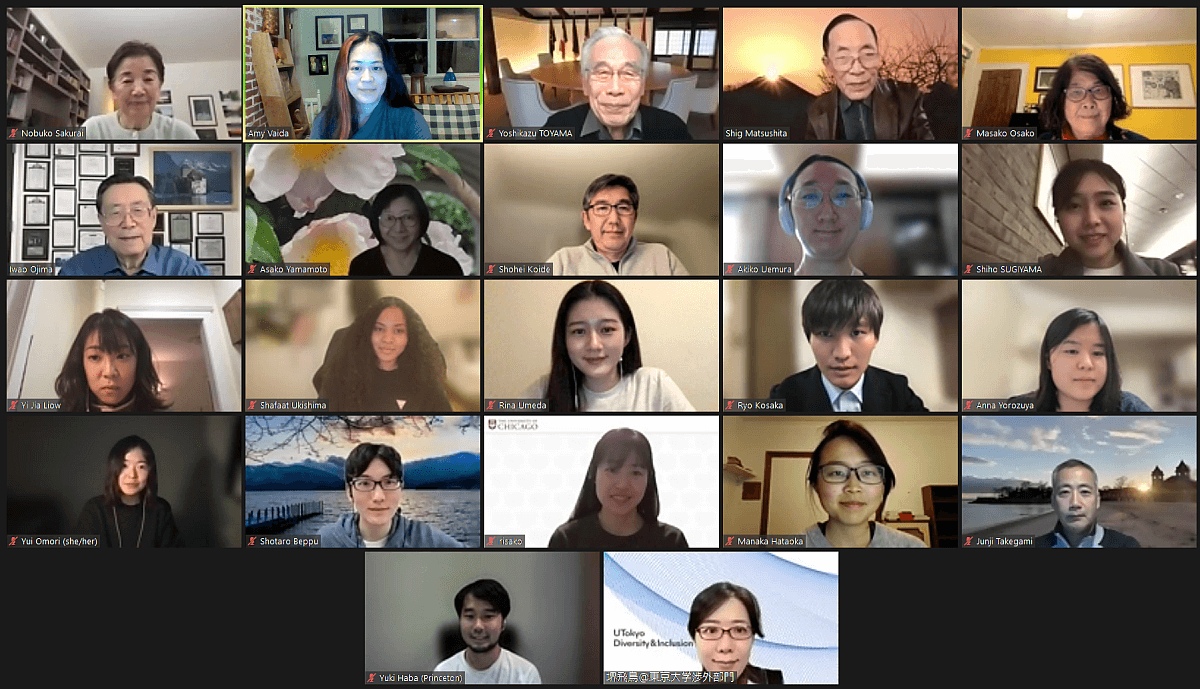 An online gathering for FUTI’s Mid- to Long-Term Scholarship recipients took place on December 3, 2022 at 8:00 PM EST via Zoom. This gathering has been occurring annually since 2020 after it was proposed by FUTI President, Iwao Ojima, and FUTI Director of Academic Affairs, Shohei Koide, to enable scholarship recipients to meet and share their studies and experience.

The meeting began with brief greetings from FUTI Scholarship Committee Chair, Shigenori Matsushita, and FUTI Scholarship Committee Vice Chair, Nobuko Sakurai. FUTI President Ojima also welcomed the students and noted that the use of Zoom due to the pandemic has opened up opportunities to have online gatherings. Yoshikazu Toyama of the Ito Foundation was also in attendance and gave a brief history of the Ito Foundation and its founder, Masatoshi Ito, founder of the Japanese general merchandise and department store, Ito-Yokado. He shared that the scholarship was established as a way to give back to society since the founder had received help as a young student which bolstered his drive to succeed.

Eleven recipients gave short presentations on their current projects and shared what they learned on and off campuses. The focus of the students’ studies ranged widely from urban architecture to robotics to politics. Some highlights from the presentations included studies on diet, microbiome, nutrition and microbiology, and the westernization of dietary composition; labor issues from various perspectives such as in different countries, rules and laws regarding employees, and the standpoint of HR and managers; and the aim for carbon neutrality and different methods that would help reach this goal such as an advanced composting facility, microbial fuel cell that generates energy from leftovers, and capturing emissions.

Some of the students shared that the relationship between the student and teacher is different from what they are used to in Japan, as in the USA there is lots of exchange and teachers are often curious as to what students have to say. One student shared that before coming to the US, she was self-conscious being a female engineer, but after being surrounded by female professors, researchers, and students in the US, she has gained confidence. Between presentations, attending members and students asked thoughtful questions which made for interesting discussions about the presentation topics, current events, and life while studying abroad.

To conclude, founder and president of the FUTI Alumni Association, Yuki Haba, thanked participants for the fascinating presentations and explained the impetus for the FUTI Alumni Association. As a former FUTI Scholarship recipient himself, he wanted to convey to the current recipients that the importance of FUTI was not just about receiving financial assistance, but it was more importantly about networking and forging lasting relationships.