FUTI hosted several newcomer welcome lunches for UTokyo students in New York and Chicago this fall in collaboration with local UTokyo alumni associations. The purpose of the gatherings was to facilitate adjustment to life in the US for newly arrived students and to offer guidance/advice to allow new students to begin enjoying their time in the US as soon as possible. At each lunch, a lively exchange took place between newcomers and older alumni, some of whom have lived in the US for over a few decades. FUTI is interested in working with UTokyo alumni associations in our effort to help our young colleagues to become future global leaders. 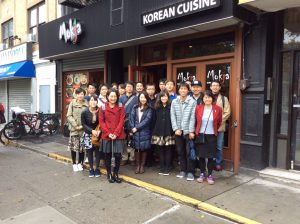 On Sunday, October 9, a group of New York area alumni welcomed some 15 current and former UTokyo students studying at Columbia University at a pan-Asian restaurant near campus. Ms. Yamashita (Satsuki-kai America’s liaison with Columbia students) thanked alumni and students for attending the lunch. Each participant then introduced himself /herself commenting on his/her specialty, aspirations, reasons for coming to Columbia, and interests. The incoming students’ majors were diverse, ranging from architecture, computer science, and biology to teaching and filmmaking. Most students have enrolled in MA programs. 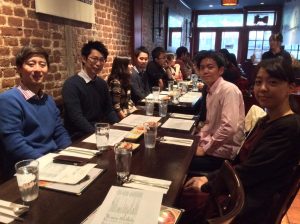 Conversation over lunch covered topics of mutual interest including the tribulations of dormitory life, challenges of studying in a cosmopolitan environment, the enormous amount of homework, vast differences in PhD and masters programs in the U.S. and career aspirations. All agreed that financing a Columbia education is immensely valuable, but very expensive. A few stressed a dire need for scholarships for those already in the U.S. but no longer affiliated with UTokyo. They were happy to hear that Ito Foundation U.S.A.-FUTI scholarships are available to such students.
After the longer-than two hour lunch, many moved to a nearby coffee shop for continued discussion (nijikai), while some others headed to a library to resume their studies. 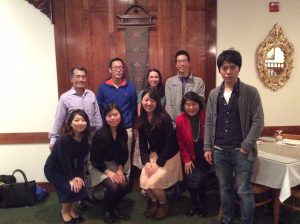 Welcome lunches for UTokyo alumni were also organized for students studying at Northwestern University and the University of Chicago (UC). On October 16, a welcome lunch took place in Evanston, Illinois for several students in the Kellogg MBA program who were joined by two University of Illinois at Urbana-Champaign undergraduates from UTokyo who are currently participating in a one-year inter-university exchange program between the University of Illinois and UTokyo. One of the students, Ms. Kusakabe (an international relations major) is a recipient of the Ito Foundation U.S.A.-FUTI scholarship.
Mr. S. Mori, a real estate developer and president of the Chicago Akamon-kai, reminisced about his student days, commenting on his experience at Harvard Business School some years ago. “A major part of the performance evaluation was based on classroom participation so we did not have the choice of remaining quiet in the classroom. In the beginning, it was hard to speak up, but eventually I got used to expressing my opinions.” The Kellogg students nodded in agreement. Dr. Laura Hein, a professor in history, who used to be a visiting faculty member at UTokyo, agreed with Mr. Mori’s and the students’ observations about differences in classroom practices in American and Japanese universities. 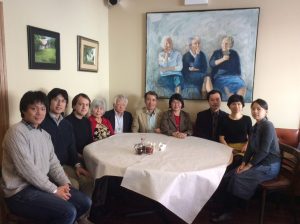 On November 12, at a Thai restaurant a few blocks away from the University of Chicago (UC) and the Natural Museum of Sciences, Chicago-area alumni welcomed several former UTokyo students in the Booth and Harris schools and a UC graduate student (Paraide Stortini) who was a participant in the UC-UTokyo exchange program earlier in 2016. Paraide impressed all with his fluent Japanese and extensive knowledge of modern Buddhism. Local alumni included Prof. Takeshi Oka, professor emeritus in astronomy and physics at the UC, and two of his former students.
After a welcome toast and self-introductions by all participants, an active exchange took place on topics ranging from the long-awaited Chicago Cubs World Series Championship and Chicago jazz to the recent Presidential election and concerns about the sharply declining number of Japanese students at the U of Chicago and other US universities. A student commented, “It was surprisingly enjoyable to exchange views with alumni who have worked in the U.S. for a few decades. I have also learned so much today.”
Author: Masako Osako, Satsuki-kai America, Friends of UTokyo, Inc.