At the Board meeting held on October 1, 2017, the FUTI Board appointed Dr. Kenzi Karasaki, President of the San Francisco Akamon-kai, and Dr. Yuriko Suzuki, President of Satsuki-kai America, as Ex-officio members of the Advisory Committee. This action reflects FUTI’s commitment to work closely with UTokyo alumni associations in the U.S. Prof. Hisashi Kobayashi, Chair of the Advisory Committee, remarks, “We are much pleased to have Dr. Karasaki and Dr. Suzuki as new members of the Committee.  I hope that their involvements will help their organization members better understand FUTI’s activities and needs. Drs. Karasaki and Suzuki have been helping FUTI by inviting our scholarship awardees to their picnics, lectures and other events. We would like to have the presidents of other UTokyo alumni groups in the U.S. to join the Advisory Committee as new members.” Their bios are shown below as they are provided to FUTI. 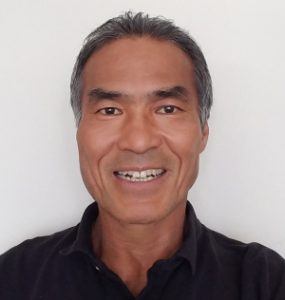 Kenzi Karasaki is a staff scientist at Lawrence Berkeley National Laboratory (LBNL) in Berkeley, California. His research interest is the subsurface hydrology in fractured and faulted rock masses. He began his career in the theory and numerical simulations of subsurface fluid flow. His current focus is in the data collection and analysis through fieldwork. The application of his research topic is fairly wide: oil and gas production, nuclear waste isolation, contaminant transport, CO2 sequestration, in addition to water resources development.
Kenzi was born in Yamaguchi and went to Yamaguchi Senior High. In the senior year, he became an American Field Service student and spent a year in Little Falls, Minnesota. Upon return, he entered Science I Class at the University of Tokyo. He lived in Koma-Ryo (the legendary Komaba Dormitory, demolished more than a decade ago) for almost four years spending most of the time playing American football, working part time and dating. He was, so to speak, a jock. After somehow completing the undergrad, he enrolled in the M.S. course in the Natural Resources Development Option in the Engineering Dept. In 1979, he came to study at UC Berkeley as a PhD student in Mineral Engineering Dept. He was first hired as an GSRA, then a postdoc, followed by the staff scientist position at LBNL. He has been with the lab for nearly 40 years.
In his private life, he plays golf a lot and currently serves as the president of Soko (San Francisco) Akamonkai, the San Francisco area alumni association of the University of Tokyo. Soko Akamon-kai has approximately 200 members. 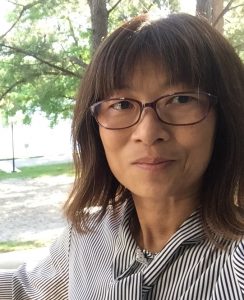 Yuriko Suzuki, Ph.D.is Principal at Y SUZUKI CONSULTING LLC. She received Ph.D. degree at University of Tokyo, Japan in 1987 for plant Science by biochemistry and cellular physiology research in photosynthetic carbon fixation mechanism. She is a secretary of the US – Japan pharmaceutical discussion group in New York City and an “accomplished communicator” in Toastmasters clubs in the US.
Dr. Suzuki is an expert in drug discovery and development, compliance and safety in large global pharmaceutical companies, small biotech startups, as well as CRO organizations. Her successful projects including; First-time-in-class drug discovery to proof-of-concept development study as well as patenting small molecule drug targets and biologics products, development and evaluation of molecular pharmacology and PK/PD assays, etc.
From 2010 to present – Principal at Y SUZUKI CONSULTING LLC
Dr. Suzuki works for research and development project management and liaison, clinical research project communication, management, and outsourcing, in depth scientific marketing analysis of the products, and supports licensing and intellectual property protection for global pharmaceutical corporations.
From 2006 to 2010 – Senior Research Investigator at Sanofi-Aventis in Bridgewater, NJ
Dr. Suzuki was an orphan GPCR project leader and global project group committee member as well as new target proposal committee member and siRNA project initiator and leader. She supported translational projects from pre-clinical to clinical development and generate and review pharmacology reports for bridging to clinical study.
From 2002 to 2006 – Senior Scientist at Millennium Pharmaceuticals Inc. in Cambridge, MA
Dr. Suzuki contributed to complete lead optimization and delivered development candidate compound, led in vitro pharmacology efforts to develop various assays and successfully delivered development candidate compounds.
From 1998 to 2002 – Senior Scientist at Neurogen Corporation in Branford, CT
Dr. Suzuki achieved to Identify new classes of GPCR and enzyme targets for treating neuronal and metabolic disorders.
From 1993 to 1997 – Post-doctoral fellow at The Rockefeller University, New York, NY
From 1988 to 1993 – Assistant professor at Jichi Medical School, Tochigi, Japan
From 1987 to 1988 – Post-doctoral researcher at Tokyo University, Tokyo and Institute for Basic Biology, Okazaki, Japan.
Satsuki-kai America has a nation-wide membership of about 100 alumnae with chapters in Boston, New York, Chicago and the West coast.
Note: The bios included in this article have been provided by Drs. Karasaki and Dr. Suzuki.