by Krithika Swaminathan
—
As one of the beneficiaries of the 2015 FUTI Global Leadership Award, I had the unique opportunity to spend three months this summer in Japan researching at the University of Tokyo. The experience was incredibly special in numerous ways, and I am so thankful to Friends of UTokyo, Inc. for giving me this amazing chance. 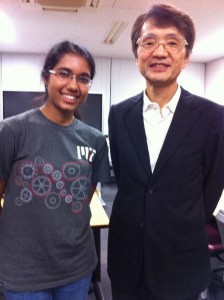 Before going to Japan, I already knew that the experience would be like none I had ever had before. However, as I have lived in both Belgium and India, I expected to find some aspects that were similar to both countries. Furthermore, my family had moved to Nagoya in September 2014, and having already visited them a couple of times, I knew some of what to expect in terms of the overall culture. Moreover, I had taken the equivalent of two college years of Japanese in total, which, augmented by the cultural training sessions provided as part of MIT’s MISTI program, had given me a general idea of Japanese culture. However, I had never been to Tokyo for an extended period of time, and being able to live there this summer definitely gave me a new perspective.
My goal for this summer was three-pronged: Academically, I wanted to spend this summer expanding my knowledge and research skills in the area of biomechanics and robotics with a focus in healthcare. I also wished to improve my Japanese conversational skills. Finally, I wanted to make as many new friends as possible, and have an enjoyable summer. 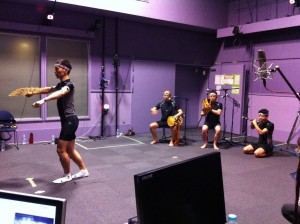 Motion capture experiment of the Noh actor and the accompaniment ensemble

I decided to work with Professor Nakamura, or Nakamura Sensei, as I referred to him, as his lab focuses precisely on the areas that I wanted to learn more about and is one of the most well-known internationally. Nakamura Sensei received his bachelors, masters and doctorate degrees from Kyoto University, and has been working at Tokyo University since 1991. His lab has three branches of focus – humanoid robot design, neuromuscular modeling, and natural language processing. Nakamura Sensei himself is mostly involved in the former two, with the final one primarily being the research interest of Takano Sensei, the co-director of the lab.
The majority of my work aligned with the neuromuscular modeling sector. My main project for the summer consisted of analyzing data from peripheral artery disease (PAD) patients taken before and after rehabilitation. The patients would come into the motion capture studio and walk on a treadmill at a speed of 2.4 or 3.6kmph based on their ability and comfort levels. I then analyzed the motion from the session using a musculoskeletal model previously developed by the laboratory in order to investigate whether the rehabilitation had led to quantifiable physiological changes in the patients. 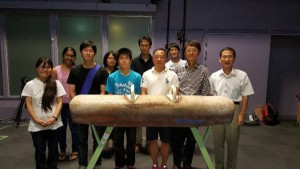 Aside from the rehabilitation data analysis, I also participated in various other motion capture experiments. The picture below is from the capture of the renowned Noh actor Keisuke Shiotsu. The purpose of the experiment was to determine whether there were some physiological indications of synergy between the various members of the ensemble. Some other interesting experiments that I helped with include an analysis of the effects of custom-fit insoles versus generic-fit insoles for the NHK television show Asaichi, and the analysis of body kinematics in gymnasts preparing for the upcoming Olympics during the pommel horse routine. The fact that I was able to meet with all of these incredible people is an outcome of the support I received from FUTI and MISTI.
As the work that I was doing this summer closely aligned with what I had been doing at MIT, I was able to bring my experience with MATLAB analysis of pre-/post- rehabilitation data and with motion capture systems to integrate relatively seamlessly into the projects. This background helped reduce the time spent in a learning curve, which in turn allowed me to focus on acquiring new skills. 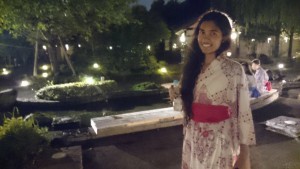 Me at Oedo Onsen, Odaiba, Ja

Since I have only worked in a lab atmosphere both in the US and in Japan, I can only compare those two cultures. Furthermore, as labs tend to differ within a country as well, depending on the director, principal director and one’s personal supervisor, it is difficult to accurately compare any two. Despite these obvious factors that lead to variance, there were some clear cultural influences in the work environment such as in the hours put in towards work, the general level of respect, the education system, and the student population demographics. Observing and learning about how the cultural differences of Japan influence the work environment was quite interesting. 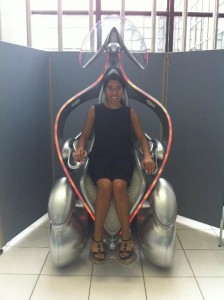 At the Toyota Museum in Toyota City

Outside of the lab environment as well, I had several wonderful experiences this summer. Through the MIT MISTI-Japan Program, I was able to travel to Kyoto and Nara to see the various historic and spiritual sites in Japan. I also visited Nagoya, Hikone and Mt. Fuji to explore with friends. However, on a more local level, within Tokyo itself, there are a plethora of historical and cultural events to see and experience.
A more modern pastime of Japanese students is karaoke. In any city, there are a number of karaoke venues in which friends can enjoy time singing together. Although I personally do not know any Japanese songs, the time spent with my lab mates could not have been spent in a better way. The camaraderie, connection, and harmony that is engendered by karaoke, particularly when everyone is an experienced singer/karaoke-singer is really breathtaking. 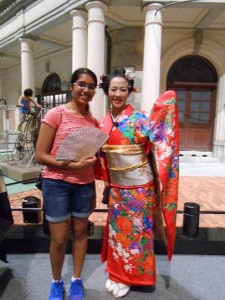 Other places that I was able to explore over this summer include Yokohama, Chiba, Kamakura, Odaiba, other sections of Tokyo, and Toyota City. It amazed me how each place had a characteristic that it was known for, such as Harajuku for its teenage and fashion culture. The amount of stuff to do within Tokyo itself makes it impossible to experience everything, even with 3 months. I would definitely like to return to Japan to continue learning about Japanese culture and strengthen my connections with everyone there.
Additionally, I myself felt that I improved in my Japanese level during the three months I was there. While I used mostly English to discuss technical details of my project, all casual conversation with my Japanese lab mates, friends, teachers, and the local people were held in Japanese. Moreover, my ability to read kanji also improved slightly as all the trains used kanji to name the stations. I personally highly prioritize the value of learning new languages as I feel that it allows you to communicate and share experiences with an entire new population, which in this case was very true. 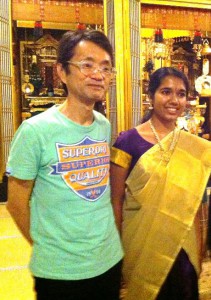 This summer was particularly cross-cultural as I was able to participate in a small charity concert in which I was singing South Indian classical Carnatic music. This is a traditional form of singing that has intricate rules and is quite an intellectual art form. It was incredible to see the amount of interest from native Japanese individuals in this art form. Even Nakamura Sensei, along with a few others from the University of Tokyo, came all the way to Kichijoji to come encourage and listen to me. The picture on the right is taken from the night of the concert. Being able to share some of my culture in return for the culture that I was learning about was a very distinctive experience.
I think that this summer definitely gave me some insight on my own perspectives and reinforced how lucky I am to be in the US. The strictness of social order in Japan as well as the strict social norms imposed on the various groups of people are two aspects of Japan that make daily living for individuals rather difficult. In particular, for women in engineering fields, the amount of support is quite low. Moreover, the level of priority given to superficial qualities such as how one looks is much higher in Japan than in the US. This type of thinking, along with the structure of the industrial workplace, deter me from wishing to pursue a full-time employment opportunity in Japan. 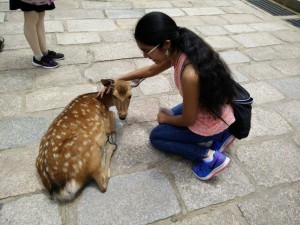 At the deer park in Nara

Despite these differences, I think that I have returned from Japan more determined to strive towards the level of perfection that they work to attain in every facet of their lives. Their hardworking and persevering nature is an incredible personality trait that I would like to attain in the future.I think that the people, the history, and just the sheer number of cool things in Japan definitely has convinced me that I would love to go back again, for maybe another summer or a year abroad. I hope to also further expand the breadth of my experiences by exploring other travel abroad opportunities in the future. I truly cannot thank FUTI enough for supporting this endeavor.
Facebook0
Twitter0
Google+0
LinkedIn0
Pinterest0
Subscribe to the FUTI Newsletter