Fundraising Results and Financial Statements of July 2010 through June 2011

At the Board meeting of August 30th, Prof. Hisashi Kobayashi, FUTI President and Interim Treasurer, reported on the fundraising result of the FY 2010-2011, which ran from July 1, 2010 through June 30, 2011. The total amount of donations was $98,651, out of which $58,461 came from the distributions of Shintech’s Trust Fund, and $40,192 were contributed by 45 individuals, including matching grants from two corporations. The total revenue was significantly lower than $139,633 raised in FY 2009-2010, which consisted of $96,432 from Shintech’s Trust fund and $43,200 from 42 individuals. “Although the number of individual donors was slightly up, from 42 to 45, the total amount of contributions is lower than last year by about $3,000. The dividends from the investments of Shintech’s Trust Fund, however, declined markedly by as much as $38,000 compared to FY 2009-2010 (i.e., from $96,432 to $58,461), reflecting the weakened financial market . I am afraid that the dividends from the Trust fund will go down below $50,000 in FY 2011-2012. In order to maintain the same level of grant and award programs, we must increase considerably donations from individuals. We need to broaden the base of our donors, as well as ask the individuals to give more to support the worthy programs of FUTI,” remarked Kobayashi. The list of donors is posted on the FUTI website. 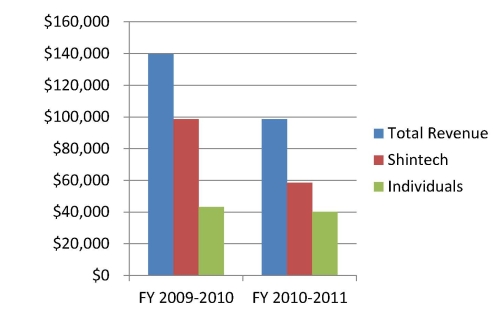 We deeply appreciate the corporations and individuals who have contributed to Friends of UTokyo, Inc (FUTI) in the fiscal year 2010-2011 (July 2010-June 2011). During this period, the donations to FUTI totaled $98,651. This includes the dividend income from a Trust Fund of Shintec Inc., (a U.S. subsidiary of ShinEtsu Co.) , and donations from individuals. Matching gifts from Mitsubishi Corporation USA and Mizuho USA Foundation are added to their employees’ donation amounts.