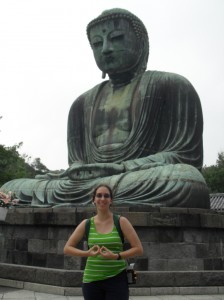 Chilling out with the Daibutsu in Kamakura

During this past summer I was lucky enough participate in the University of Tokyo’s Research Internship Program (UTRIP) as a member of the Tachibana Laboratory. The Tachibana laboratory is an organic chemistry lab which focuses on a class of marine toxins known as polycyclic ethers. Polycyclic ethers are of special interest because they are one of the main toxins present in red-tides, and also are of concern for their bioaccumulation in edible shellfish. Unlike many laboratories which classify themselves only as synthesis labs or only isolation labs, members of the Tachibana lab could be working on anything from isolating novel compounds from biological samples to determining how those molecules interact with their target cells to trying to synthesize those molecules in the laboratory.
My research centered on confirming the Nakanishi hypothesis, which is the current reigning theory on how red-tide dinoflagellates synthesize polycyclic ethers. This is actually quite the puzzle because polycyclic ethers are some of the longest and most complex bioorganic molecules that aren’t polymers. Their creation is an impressive feat of biological engineering. The Nakanishi hypothesis postulates that the cell first creates a polyene (a long molecule with multiple double bonds) which then is polyepoxidated. That basically means all the double bonds are turned into epoxides (a little triangular group with an oxygen atom at the apex). This epoxide precursor then undergoes an enzyme-mediated cascade reaction to produce the desired polycyclic ether. My work involved creating a small precursor molecule and incubating it with the dinoflagellate serum to see if the predicted polycyclic ether is observed. If it were, it would lend credence to the Nakanishi hypothesis. 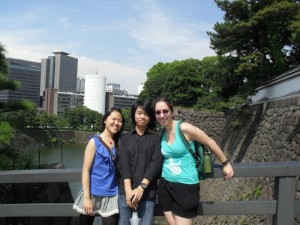 Exploring the Imperial Palace Gardens with other members of UTRIP

Though my results were inconclusive about whether the predicted product was formed, I learned quite a lot about working in a chemistry lab. While I had worked previously in a biology lab and taken a laboratory class in chemistry, working in an actual chemistry lab setting was very different. I had to learn to use a lot of instrumentation and reagents I only knew about in theory, but which I had never handled myself. For me, that was one of the coolest parts. It is one thing to learn about it in class, but quite another to actually do it yourself. Of course, that also meant that I learned a lot about setbacks and mistakes, which are an important part of any scientist’s training. However, the understanding and helpfulness with which my labmates handled my multiple missteps was truly wonderful.
For me, a huge part of what made this experience amazing was the people. My labmates went out of their way to make me feel welcome and teach me about Japanese culture. From trips to Nikko and some of the most beautiful scenery I’ve ever seen, to inviting me to their homes so I could try Japanese home-cooking – and learn to eat a salad with chopsticks! – to taking me to a hot spring so I could experience a Japanese tradition, they gave me so many lasting memories. What amazed me the most was how welcoming and kind everyone was, from strangers on the subway helping me board the correct train late at night, to my associate professor giving me a fan when I went to Kyoto to make sure I didn’t get heat stroke.
Of course, the fun and welcome didn’t end with just my labmates. I also had a wonderful time getting to know the other participants from UTRIP while exploring the city. There are so many amazing things to see in Tokyo, from ascending SkyTree at night to indulging in crepes at Harajuku to standing in line for the world’s best sushi at Tsukiji. I think my favorite thing was the oases of trees in the middle of one of the largest cities on the planet, whether it was a tiny temple or a park, there were just trees everywhere. It was lovely. 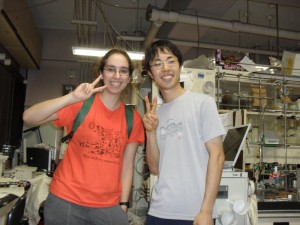 Having fun with a labmate

And when I wasn’t wandering the city looking for wonders, I was learning about all of the fascinating research going on at UTokyo. I was amazed at how well the professors were able to explain such widely-varying topics as string theory, the Great Eastern Japan Earthquake, and the reproductive habits of algae. It was also  really neat to find out the research my friends in UTRIP were doing in their labs.
While I hope that I gave something back to my laboratory, be it in my research exploits or my various attempts to explain American culture, I know they gave me much more. I have to admit that until about a month before I arrived in Tokyo I wasn’t sure what my major was. I had narrowed it down to either chemistry or computer science. I eventually chose chemistry partly because of how much I had enjoyed my organic chemistry class, but if I were completely honest with myself, I wasn’t totally committed. Now I am. While six weeks wasn’t near enough time to accomplish any groundbreaking results, it was more than enough to convince me that this was what I want to do. I am a chemist. So I owe quite a lot to UTokyo and FUTI. They helped me find my passion. So thank you.
Facebook0
Twitter0
Google+0
LinkedIn0
Pinterest0
FUTI 奨学金