FUTI President Hisashi Kobayashi, who is Senior Distinguished Researcher of the National Institute for Information and Communications Technology (NICT) visited Tokyo for two weeks from March 31, and on April 2 he paid a courtesy visit to Dr. Chihiro Kanagawa, Chairman of Shin-Etsu Chemical Co., Ltd. as well as Chairman and Founder of Shintech, Inc. and Mr. Toshiya Akimoto, Managing Director of Shin-Etsu Chemical. Kobayashi was accompanied by Mr. Kazutaka Yamaji, Director General, and Mr. Yoichi Yoshida, Director of the Development Division of UTokyo. 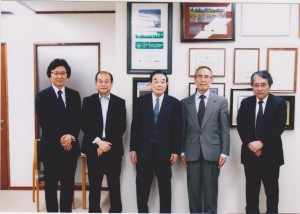 Shintech, Inc. (Houston, Texas), which established a Trust Fund of $5 million in March 2009 with FUTI as its beneficiary, has generously extended its agreement until 2020. Kobayashi expressed his thanks by saying “The donations from Shintech constitute 50% of our revenue. Because of your generous gift, we will be able to provide summer scholarships to about 20 students again this year. We are very grateful to Dr. Kanagawa for his continued support of FUTI.” Dr. Kanagawa then responded, “It is our great pleasure that our Trust Fund can help nurture the young people in Japan and America who will carry their countries on their shoulders in the future.”
During their meeting, which took about 30 minutes, the conversation moved to some old memories of Dr. Kanagawa, going as far back as the 1970s, which are also described in the book, “The Shintech Story,” (217 pages, published in March 2014). The book is a compilation of the history of Shintech, Inc., which will celebrate its 40th anniversary this year.
Shintech, Inc. started the production of polyvinyl chloride (PVC) at Freeport, Texas in October 1974. The annual production capacity was 100,000 tons, and Shintech embarked on the road to operation as the 13th largest manufacturer in the U.S. Dr. Kanagawa, who managed the company, aggressively penetrated both the U.S. and world markets, and expanded its production capacity to 450,000 tons in ten years, and by 1990, the production capacity reached 900,000 tons. In 2001, the company became the global leader with an annual production capacity of 2,040,000 tons, which further grew to 2,630,000 tons by 2010.
We can learn a great deal about Dr. Kanagawa’s management philosophy from his series of articles “My life story,” which appeared as a running story in Nihon Keizai Shimbun newspaper in 2006, and from the several books he authored. “Select a few with exceptional talent” is his motto and underpins his management principle. Needless to say, he has received numerous awards and recognitions, both in Japan and from abroad. But it deserves special note that Dr. Kanagawa, a 1950 UTokyo graduate from the Faculty of Law, Department of Politics, was awarded in June 2011 a Ph.D. from the Graduate School of Engineering, UTokyo, for his thesis entitled “Management in the Polyvinyl Chloride Industry: Strengthening Business and Management of a Commodity Chemical Business.”