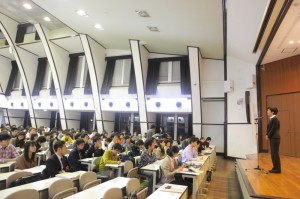 The “Go Global 2012” Fair, which was designed to encourage UTokyo students to study abroad, was held at the Komaba Campus on May 26th (Thu) and 27th (Fri) .
The plenary session on general information of May 26th was attended by about 500 participants, nearly filling the meeting room –Lecture Theater 900– to its capacity. The meeting started with a welcome speech by Dr. Masako Egawa, Executive Vice President, followed by a session in which the International Affairs Division’s staff provided general information regarding the oversea study programs. Then five students who had studied abroad reported on their experiences, and a panel discussion by them concluded the meeting.
In the general information session, such topics as UTokyo’s exchange programs, short-term study abroad programs, scholarships, etc. were presented. In the session where the five students spoke, various types of oversea experiences were reported, including individually arranged oversea studies, ones arranged by some exchange programs, short-term studies, volunteer work, and internships abroad. In the panel discussion, which lasted for about an hour, the five panelists exchanged their opinions on happenings or opportunities that triggered their decisions to study abroad. 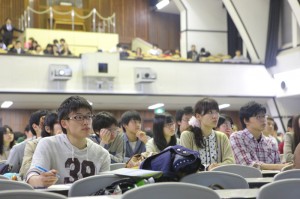