FUTI Awards a Grant to the UTokyo-Yale Initiative

FUTI announced in July 2011 that a grant of $30,000 would be given to the UTokyo-Yale Initiative (TYI) at Yale University to support, among other projects, an international conference titled, “International Development Cooperation among Asian Donors,” to be held in New Haven, CT on March 29-30, 2012. The conference will bring together experts on the subject from the U.S., Japan and elsewhere.
The lecturers from the University of Tokyo include Prof. Akio Takahara, Graduate Schools for Law and Politics, Associate Prof. Yasuhiro Matsuda, the Institute for Advanced Studies on Asia, and Associate Prof. Shin Kawashima, Graduate School of Arts and Sciences, Department of Advanced Social and International Studies (History of International Relations). Dr. Takahara is an expert on politics and diplomacy of contemporary China and Dr. Matsuda specializes in politics and foreign relations in China and Taiwan, while Prof. Kawashima has conducted extensive research on the diplomatic history of Asia. 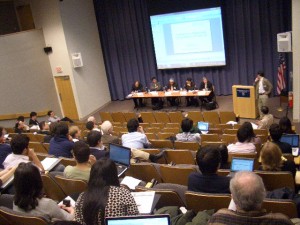 A photo taken at the international conference titled “Diplomatic Policy and Recent Government Change in Japan,” held at Yale University in 2010, partly supported by FUTI’s grant.

In addition to the above UTokyo professors, scholars from Yale University and Seoul National University will join the conference. However, details of the conference are yet to be announced. In addition to FUTI, the Council for East Asian Studies at Yale University and the Japan Foundation will co-sponsor this conference. The grant from FUTI will be used primarily to cover the expenses of the UTokyo professors.
“We are grateful to FUTI for its generous support for the conference that will bring together international experts in a face-to-face scientific exchange, contributing to the advancement of the field of Japanese and Asian Studies,” said Prof. Masashi Haneda, Director of the Institute for Advanced Studies on Asia, the University of Tokyo, who is in charge of the TYI program.
The TYI was founded in October 2007 at the initiation of President Richard C. Levin of Yale University and the then UTokyo President, Dr. Hiroshi Komiyama, to strengthen the international promotion of Japanese Studies and Japan-related research in the humanities and social sciences.