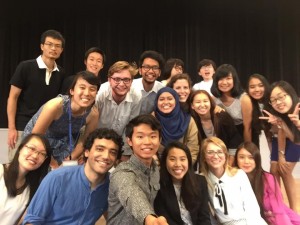 All the UTSIP participants after finishing their individual presentations. (Picture by Peter Wang)

As reported in Newsletter 15, six University of Tokyo (UTokyo) students and eight U.S. students received the 2016 FUTI Global Leadership Awards (FUTI-GLA). The FUTI summer scholarship award, a.k.a. the “FUTI Global Leadership Award (FUTI-GLA),” is designed to nurture future global leaders of Japan and the U.S. One of the selection criteria is a demonstration of leadership quality. Selected excerpts of their reports are shown in this article.
Six UTokyo students participated in various summer programs at U.S. universities, such as University of California, Berkeley; Yale University; University of Michigan; and Stanford University. Two were science or engineering majors, while three were humanities or social science majors and one was enrolled in the Program in English at Komaba (PEAK). Four were undergraduates (one freshman, one sophomores, and two seniors), and two were graduate students (one M1, one M2) at the time of FUTI application submission. This year, no students participated in the Global Summer Program (GSP) or English language courses.
Five out of the eight U.S. awardees conducted research as summer interns at UTokyo’s laboratories. Three of these recipients participated in the University of Tokyo Research Internship Program (UTRIP), which was hosted by professors in the School of Sciences at UTokyo. One participated in the University of Tokyo Summer Internship Program in Kashiwa (UTSIP-Kashiwa) hosted by the Graduate School of Frontier Sciences. The selection process for FUTI awards was highly competitive. For instance, the three UTRIP participants had been selected from over 40 U.S. undergraduates, many of whom were top students from leading universities in the U.S.
In addition to these internship students, two Yale students (both seniors) and one UC Berkeley student (sophomore) were selected to participate in the Global Summer Program (GSP) courses offered by UTokyo.
FUTI also awarded travel scholarships to a high school student from Mississippi who started the PEAK program at UTokyo in October 2016.
In addition to the summer scholarships, FUTI also awarded USA Ito Foundation-FUTI scholarships to nine UTokyo students as reported in Newsletter #15 for their studies of one semester or longer in the U.S. during the 2016-17 academic year. However, their reports are not yet available online.
The list of summer 2016 award recipients are posted on our website. For full reports, please click here.
Highlights from UTokyo Students’ Reports
The six UTokyo students who spent the summer in the U.S. reported that classroom and lab work was intensive and was highly valuable allowing them to expand their intellectual and cultural horizons and to critically re-consider future careers. They also made many friends of various nationalities and started to build a global professional network.

This past summer I undertook a program at ICPSR, an association among universities in the world, which archives various kinds of political and social survey data and provides training and opportunities for researchers globally to analyze these data. I am firmly convinced that this summer’s experience is extremely valuable for my future research career. What I achieved from this program far exceeded my initial expectation. At ICPSR by talking with graduate students from all over the world, I was able to share various experiences first hand and establish a viable professional network.

I found the courses challenging. They made me see what I did not notice in Japan. When I took a biology course at UTokyo, I simply read textbooks and listened to the professor. However, at Yale the summer school, I was asked to formulate my own interpretation as to how one specific function of the cell was related to cancer. I am really thankful to FUTI for giving me this precious opportunity. I will keep working hard to make full use of what I learned this summer.

Highlights from U.S. Students’ Reports
The eight students from U.S. universities invariably reported that they gained valuable knowledge or research skills at UTokyo. Outside the classroom, they enjoyed sightseeing and traditional culture like tea ceremony through which they developed a respect for the unique characteristics of Japanese society and culture.

My work on the metal-macrocycle frameworks at UTokyo allowed me to develop new laboratory skills and broadened the scope of my research experiences, which will help to guide my research in graduate school and beyond. I was also able to meet with many UTokyo students and now have a much better understanding of graduate programs in Japan. It truly was a once in a lifetime opportunity, and left me with a deep appreciation for Japan, its culture, and people. I hope to return to Japan in the near future.

In the last class of GSP we debated on the Senkaku/Diaoyu island dispute, with Japanese students playing the Chinese government and all other students playing the Japanese counterpart. In order to figure out the best and most just way to solve the global challenge we are facing together, in my opinion, it is the necessity to cooperate. I sincerely hope that Japan’s experience in democratization, modernization and pacification could contribute more to contemporary global challenges. I would like to thank FUTI for giving me the opportunity to have such a rewarding experience.