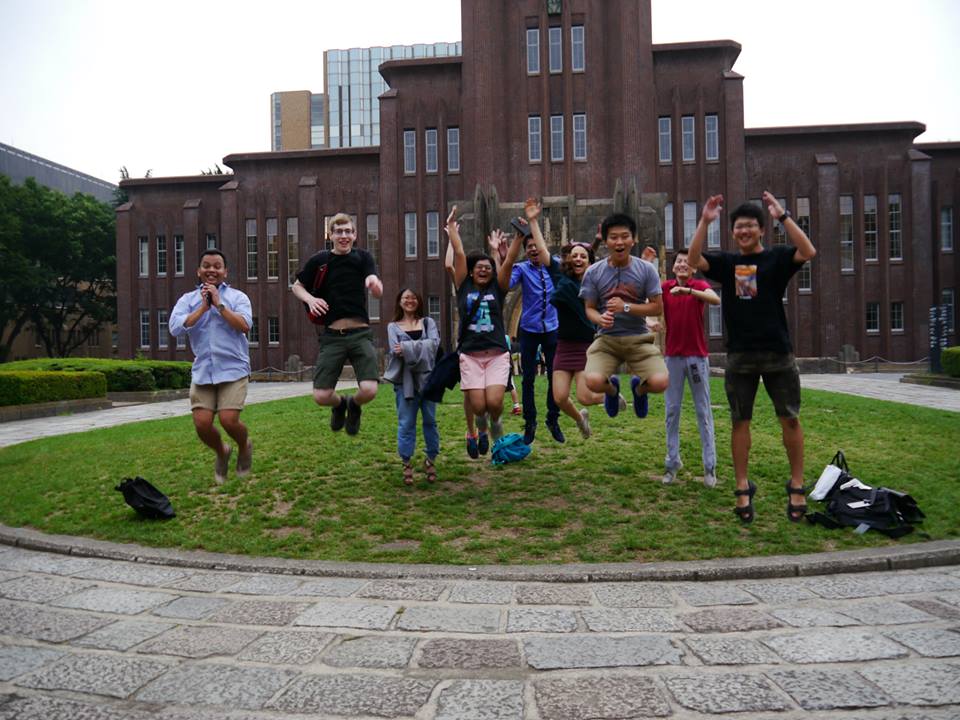 As reported in Newsletter 13, nine UTokyo students and 11 U.S. students received the 2015 FUTI Global Leadership Awards (FUTI-GLA). The FUTI summer scholarship award, a.k.a. the “FUTI Global Leadership Award (FUTI-GLA),” is designed to nurture future global leaders of Japan and the U.S. One of the selection criteria is a demonstration of leadership quality. Selected excerpts of their reports are shown in this article.
Five out of the selected nine UTokyo students participated in various summer programs at U.S. universities, such as University of California, Berkeley, Harvard University, University of Michigan, Princeton University, and Stanford University; three attended English language courses at Yale University, Columbia University, and U.C. Berkeley; and one participated in the Global Summer Program (GSP) at Yale. Six were science or engineering majors, while three were humanities or social science majors. Five were undergraduates (three sophomores, one junior, one senior), and four were graduate students (three M1, one M2) at the time of FUTI application submission.
Seven out of the 11 U.S. awardees conducted research as summer interns at UTokyo’s laboratories. Five of these recipients participated in the University of Tokyo Research Internship Program (UTRIP), which was hosted by professors in the School of Sciences at UTokyo. Two participated in the University of Tokyo Summer Internship Program in Kashiwa (UTSIP-Kashiwa) hosted by the Graduate School of Frontier Sciences. In addition, two MIT students took internships at UTokyo science laboratories. The selection process for FUTI awards was highly competitive. For instance, the five UTRIP participants had been selected from over 40 U.S. undergraduates, many of whom were top students from leading universities in the U.S.
In addition to these internship students, two Yale students (both Sophomores) were selected to participate in the Global Summer Program (GSP) courses offered by UTokyo.
FUTI also awarded travel scholarships to two high school students in travel scholarships to a high school student from California and Oregon who started the PEAK program at UTokyo in October 2015.
The list of 2015 award recipients are posted on our website. For full reports, please click here.

The nine UTokyo students who spent the summer in the U.S. unanimously commented, “We learned a great deal inside and outside classroom. The summer experience helped us expand our intellectual horizon regarding both the world and Japan, and gave us opportunities to rethink our career plans.” Many of them further said that “classroom and lab works were intensive” and “were able to establish close friendship with students coming from many countries.”
Natsuki Furukawa, Pharmacology/Biology, Junior: Harvard University Summer School, “Cancer” and “Bioimaging”

This summer, I participated in the Harvard Summer School for 7 weeks. I took two courses; one about cancer, and the other about imaging in biology. There are many things going on in cancer cells, and it was very interesting for me. The quality of instruction was high. I could gain profound knowledge about “Cancer” and “Bioimaging”. The class studied data professional scientists actually used in their work. The Summer School encouraged me to study abroad for graduate school to become a world class biologist in the future.

During summer session, One of the two classes I took was “Business Speaking” where I made discussion, presentation in terms of business issues. In addition to classes, I could learn a lot from daily lives in Berkeley. .. My American friends at the dorm were not reluctant to talk to me at all, but they talk with me and share knowledge and feelings. (From this experience) I made up my mind to become more open to international students in my university, (as I had an opportunity to) broaden my understanding of perception and values of people from various background.

Columbia’s English course is not only about English as a language. Its aim is to let us learn American culture using English. ..I would like to say that the most important part of this summer was to meet my classmates who came from Asian countries (China, Japan, Korea and Taiwan), After every class, we discuss many issues surrounding our countries, and sometimes the discussion was lasting to midnight.

English learning is the first step toward my dream of becoming a world-leading scientist. But “that was one small step for a man, one giant leap for me.” Without FUTI’s help, I would not have experienced such great things, which dramatically changed my life. I am currently taking my second and third steps toward this dream by being a graduate student at Columbia University.

The 11 students from U.S. universities invariably report that they gained valuable research skills and experience at UTokyo. Many expressed their desire to go back to Japan because of their positive impression of the Japanese culture and society.
Indy Liu, Reed College, Physics, Junior: UTRIP, Prof. Hirofumi Sakai’s Lab

As a student of theoretical physics at a liberal arts college, it was eye-opening for me to participate in an experiment that stands at the forefront of its field. I have learned much about the excitements and struggles of being an experimental physicist. I have learned a tremendous amount about both the exciting and the challenging aspects of experimental physics.* The time I have spent in professor Sakai’s lab has further motivated me to continue on in physics, and the time I have spent outside the lab made me all the more eager to live in Japan. So, as I step onto the plane at Haneda airport, Japan, good bye for now, but I will be back.
*Taken from Indy Liu’s report on Friends of UTokyo, Inc.’s Facebook page

The Global Summer Program (GSP) Nanoscience course at the University of Tokyo granted me one of the most memorable summer experiences I have had thus far, filled not only with engaging academic learning but also exciting cultural immersion.The classes, lab tours, and community of highly motivated students have quelled my hesitation toward the biological side of nanoscience and encouraged me to continue pursuing my interests in science through academia.

I am so grateful for the exciting science I learned, the rich culture I experienced, and the diverse people I befriended this summer. And holding on to the precious memories I collected, I look forward to more adventure in Japan in the future.

For someone who thinks of herself as a scientist-in-training, the experience (at the Ozawa lab) proved to be immensely valuable in allowing me to form a sense of the conditions under which a professional scientist works…I truly felt that I was surrounded by brilliant young scientists who had the drive and the discipline to pursue worthy scientific questions. ..I left Japan with the understanding that in hard-work, patience and discipline, Japanese people are difficult to rival. I truly hope to come back to Japan for graduate studies to learn more from my Japanese colleagues.