Excerpts of Reports by FUTI’s Scholarship Recipients in 2013 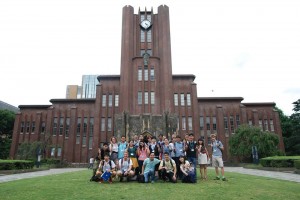 As reported in Newsletter No 7 and No 8, eight UTokyo students received the 2013 FUTI Global Leadership Award (FUTI-GLA). Two students  participated in the Global Summer Program (GSP) at the University of California, Berkeley (UCB),  one in the GSP  at Yale University, two in Yale’s English Language Institute (ELI), and one in Yale’s Summer School (YSS).  GSP or ELI/YSS are coordinated by the Oversea Study Program Office of UTokyo. Two students found other summer schools on their own, and applied to FUTI for financial support and won the FUTI-GLA.
Eleven students of U.S. universities won the FUTI –GLA  this year. Three  were enrolled in the GSP at UTokyo, six in the University of Tokyo Research Internship Program (UTRIP) organized by the School of Sciences of UTokyo, and two MIT students did internships at UTokyo  through the arrangement of the MISTI (MIT’s International Science and Technology Initiative) program.
The roster of 2013 award recipients and their reports are posted in the News section and on the blog page of FUTI’s website, respectively. For full reports, please click here.

The eight UTokyo students state who spent the summer in the U.S. unanimously state, “The summer experience was very valuable and significantly affected our views of Japan and the world as well as our own career plans.” Professor Hisashi Kobayashi, President of the FUTI, observes, “Many of the UTokyo students who spent this past summer in the U.S. seem to be seriously considering doing their graduate study or post-doctoral research in the U.S.“ The following are excerpts from some students’ reports.
Genki Takahashi (Agriculture, Senior)

I had a quite unique and productive summer by taking a course on “Environmental Design Summer Institute” at UC Berkeley. Before I took this program, I assumed landscape design had something to do with being artistic and having an experienced background in the field of fine arts. This idea made me recoil from determining my future career.” I realized my experience and knowledge that I cultivated during my four years in UTokyo is good enough to compete with my peers who have experience in the field of arts. This realization crystalized my vision of myself as a landscape architect and encouraged me to decide to take my next leap; apply to graduate schools in the U.S.
Nako Kondo ( International Relations, Senior)

I took two courses at Yale’s summer school: “U.S. Strategy After the Cold War” and “Film, Video, and American History.”   Throughout the Yale summer session, I struggled to keep up with my class and tried hard to perform well.  Speaking up in class was difficult at first due to my language incapability; however, I gradually got used to discussion by preparing questions and opinions that I would bring up in class and purely by trying many times. ….. I gained a great deal both in and outside of the classroom; moreover, it was really enjoyable. My experience there strongly motivated me to pursue graduate education after some years of work experience. I express my sincere gratitude to Friends of UTokyo, Inc. which made my wonderful experience possible.
Kohei Oyabu (Aeronautical Engineering, Master 2nd year)

I enrolled in the English Language Institute (ELI) program, which is designed to help international students improve their English proficiency. My English was terrible and I had never talked with foreigners prior to this past summer. Through this program, I not only learned English and various cultural differences, but also recognized Japan’s strengths and weaknesses. We Japanese do not have many opportunities to “use” English, even though we study English for more than 10 years…. I was overwhelmed by the drive and energy of foreign students, especially Chinese students…..I worry that we will be surpassed by other countries soon if Japan’s young generation passively accepts things as they are. On the other hand, I am confident that Japan still has power to lead the world, unless we stop making efforts…I am sure that my experience in the Yale Summer School will profoundly affect my educational and personal future growth.
Kai Tamura (International Relations, Junior)

I attended an IARU-GSP (International Alliance of Research Universities –Global Summer Program) course at Berkeley titled, “Media and Global Protest Movement,” which was a memorable experience. While we were at Berkeley, we could eat meals together, go to cafes to study or chat, go to the pool to do some readings. We were together during the whole period.…we became like a family after the six weeks…The IARU GSP is an amazing program such that you not only learn the course materials, but also have valuable opportunities to discuss with students from all over the world who have different perspectives, and to become really good friends with them.

The 11 students from U.S. universities invariably report that they gained valuable research skills and experience at UTokyo, and came back with a very positive impression of UTokyo and its programs as well as the Japanese culture and society.
Victoria Winters ( MIT, junior)

I was an intern at  the Takase-Ejiri Lab at UTokyo, which focuses on magnetic confinement nuclear fusion research on a spherical Tokamak called the TST-2. My experience in the Takase-Ejiri lab is unforgettable. I learned so much during the three months when I was there, about both physics and Japanese. Although much of the plasma physics was unknown to me, both the students and the assistant professor were willing to help me and offer explanations. I believe that I learned more plasma physics in these three months than in my previous research experience which lasted two years! But studying at the University of Tokyo wasn’t just about learning physics, I learned a great deal of Japanese from my new friends in the lab. Being able to practice foreign language with native speakers helped me a lot and I appreciate the solidarity that exists in the Takase-Ejiri lab. Everyone works together, and I felt included and like I was part of the group.
Elton Ho (University of Virginia, junior)

I participated in the Belle II project of Prof. Aihara’s Lab over 6 weeks as a UTRIP intern. Nothing feels better than being able to gain from and contribute to science at the same time. Exciting physics and technologies were introduced, and a reassuringly vibrant academic environment was presented in front of me. The six weeks have shown that doing high energy physics at UTokyo is undoubtedly very promising. Aside from research, cultural and bonding experiences had been life-changing to me. I could not show how much I appreciated activities organized by UTRIP and my lab.

I was interested in the mass distribution of a galaxy cluster called Abell 1835 to see whether this distribution can reveal anything about dark matter.  My study under the guidance of Prof. Makishima concluded the presence of dark matter in the galaxy cluster.   I had never tried a project like this before, and I gained a lot of new skills and knowledge from carrying it out. The opportunity to conduct this research helped me grow in many ways. I feel that I have a much better sense of what graduate student life is like. I am also compelled to apply to UTokyo in the future, since I had such a great experience there.

I joined the research of Prof. Tachibana’s chemistry laboratory which focuses on a class of marine toxins known as polycyclic ethers.  I participated in the research on how red-tide dinoflagellates synthesize polycyclic ethers.    I have to admit that until about a month before I arrived in Tokyo I wasn’t sure what my major was. While six weeks wasn’t near enough time to accomplish any groundbreaking results, it was more than enough to convince me that this was what I want to do. I am a chemist. So I owe quite a lot to UTokyo and FUTI. They helped me find my passion. 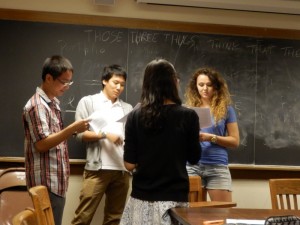 The eight UTokyo students who received this year’s FUTI Global Leadership Award are listed below with the summer program and the US institutions where they studied.
GSP at the University of California, Berkeley (UCB) or Yale University

ELI or YSS at Yale Universit 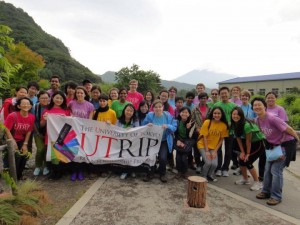