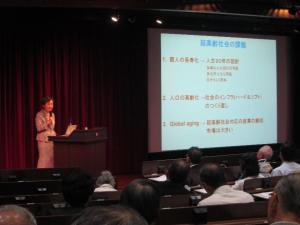 The Eighth “Appreciation Party of the University of Tokyo Foundation” was held at Koshiba Hall and Sanjo Kaikan on the Hongo Campus on June 11th (Wed), 2014. This party is an annual event in which UTokyo expresses its gratitude to its donors. “Contributing Members” (whose cumulative contributions have exceeded JPY 300,000) are the invitees. The rules have been changed since last year such that donations to FUTI are now counted in the same way as direct donations to the UTokyo Foundation. Therefore, several FUTI donors received an invitation to the Appreciation Party this year (see the related article in Newsletter No. 10).
The party was attended by 91 donors, including some from the United States. The participants were guided to Ito International Research Center, where they could view their engraved nameplates posted on the wall. At the party that started at Koshiba Hall, Mr. Kazutaka Yamaji, Director General of the Development Division, reported on the donation activities of the past fiscal year and the accomplishment of major projects.
Then a lecture entitled “Life in a longevity society” was presented by Project Professor Hiroko Akiyama of the Institute of Gerontology at UTokyo. She talked about the life in a super-aging society, and discussed how its social structure and community would have to change. The donors listened intently to her lecture. 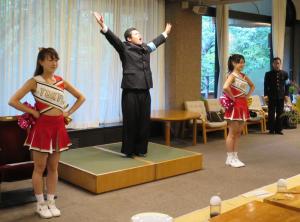 After her lecture, the reception hosted by President Junichi Hamada took place at Lounge Harmony in Sanjo Kaikan. It began with a thanks greeting by the president and his report on the progress of the mid-term plan for UTokyo, followed by a toast proposed by Dr. Masako Egawa, Executive Vice President. Then a convivial and lively meeting among the donors, the administrative staff and faculty members ensued. In the middle of the reception, the cheerleading club presented a dance performance, and the party became really lively when UTokyo’s rooster song “Tada Hitotsu” (Only One) was sung by all the participants. The lively gathering adjourned after 7 pm with a thanks speech by Mr. Yamaji. We, staff of the Development Division, look forward to seeing FUTI donors next year as well. (This article was prepared by Yasuyuki Izumi of UTokyo, translated by Hisashi Kobayashi and edited by Brian Mark)
(Read this article in Japanese)