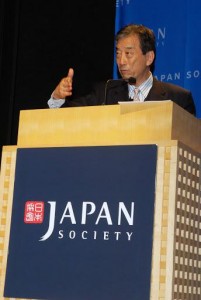 On October 17, 2012, Dr. Kiyoshi Kurokawa, Academic Fellow of National Graduate Institute for Policy Studies, and Professor Emeritus of the University of Tokyo, who chaired the National Diet of Japan Fukushima Nuclear Accident Independents Investigation Commission (NAIIC), delivered a speech entitled “NAIIC Report on Fukushima: Lessons Learned and Next Steps Forward” at Japan Society of New York. After the welcoming speech by Japan Society’s President Motoatsu Sakuarai, Mr. Daniel Bases, Correspondent for Thompson Reuters, presided over the meeting.
Dr. Kurokawa outlined the mission of NAIIC, its investigation process, its major findings and recommendations. He asserted that the accident at the Fukushima Daiichi Nuclear Power Plant subsequent to the earthquake and Tsunami of March 11 “cannot be regarded as a natural disaster. It was clearly a manmade disaster—that could and should have been prevented.”
According to Prof. Kurokawa, its fundamental causes are to be found in the ingrained conventions of Japanese culture, namely, “our reflexive obedience; our reluctance to question authority; our devotion to “sticking with the program”; our groupism; and our insularity.” He also stated that only by grasping this mindset can one understand how Japan’s nuclear industry managed to avoid absorbing the critical lessons learned from Three Mile Island and Chernobyl; and how it became accepted practice to resist regulatory pressure and cover up small-scale accidents. 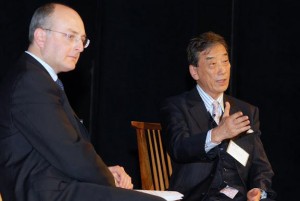 Prof. Kurokawa explained NAIIC’s several recommendations for avoiding future nuclear catastrophes. They include: 1) a permanent committee in the National Diet to oversee the regulators in the field of nuclear energy; 2) a drastic corporate reform of Tokyo Electric Power Company and new relationships established among the electric power companies built on safety issues, mutual supervision and transparency; 3) establishment of a system to deal with long-term public health effects, including monitoring and decontaminating radiation-affected areas.
Prof. Kurokawa concluded his lecture, saying that the mindset that supported the Fukushima catastrophe” can be found across Japan. In recognizing that fact, each of us should reflect on our responsibility as individuals in a democratic society.”
This lecture was presented as part of the Yoko Makino Policy Series of Japan Society. For the reports published by the NAIIC, please visit http://www.tepco.co.jp/en/press/corp-com/release/2012/1205638_1870.html . 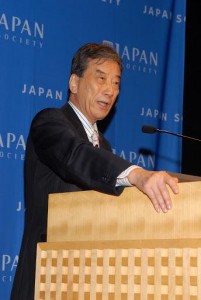 Kiyoshi Kurokawa, MD is an Academic Fellow of National Graduate Institute for Policy Studies; Chairman, Health and Global Policy Institute; and Chair and Co-Founder of IMPACT Japan. A graduate of University of Tokyo Faculty of Medicine, he was a professor of medicine in the departments of medicine at UCLA School of Medicine (1979-84) and University of Tokyo (1989-96); Dean of the Medical School at Tokai University (1996-2002); President of Science Council of Japan (2003-06); and Science Advisor to the Prime Minister (2006-08). He served as an executive member of many national and international professional societies of his disciplines, including Commissioner of WHO (2005-09); board members of A*STAR (Singapore), Khalifa University (Abu Dhabi);  Advisory Board to the Prime Minister of Malaysia;  and is an elected member of various scientific societies, including the Institute of Medicine of the National Academies of Sciences of USA, Master of American College of Physicians and Founding Governor of ACP Japan Chapter (2003-2011). He has served and serves in many committees of the government of Japan.
Among many honors he has received are the Medal with Purple Ribbon from the Government of Japan (1999), The Order of the Rising Sun, Gold and Silver Star (2011), AAAS Award for Scientific Freedom and Responsibility, and Distinguished Achievement Award of the Tokyo American Club, Foreign Policy.
Professor Kurokawa’s speech at the Welcoming Ceremony of UTokyo held on April 12, 2013 can be found in his website http://www.kiyoshikurokawa.com/en/blog/