Dr. Iwao Ojima, Recipient of the 2019 Ernest Guenther Award, Gives Talk on the Development of Next-Generation Taxanes and Their Tumor-Targeted Delivery for Efficacious Cancer Chemotherapy 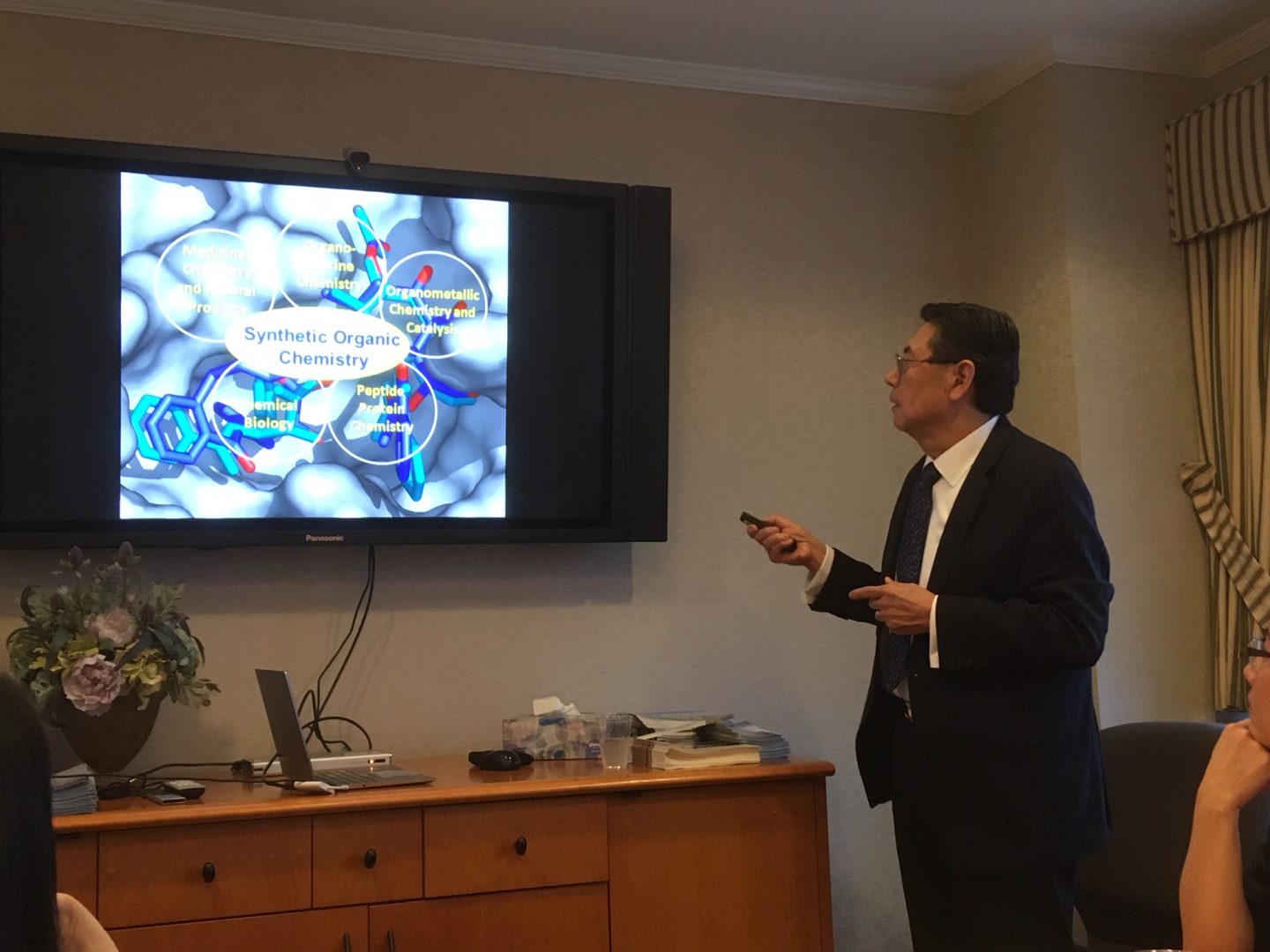 On March 15, 2019, Dr. Iwao Ojima, University Distinguished Professor, State University of New York at Stony Brook and a member of FUTI Advisory Committee gave a lecture in New York titled “Quest for Efficacious Cancer Chemotherapy based on Next Generation Taxanes and Their Tumor-Targeted Delivery.”  The event was organized by Satsuki-kai America and supported by Friends of UTokyo, Inc. More than 20 participants including alumni, graduate students, researchers, and pharmaceutical professionals, attended the lecture held at the UTokyo New York Office in mid-Manhattan.

Dr. Ojima started his career in the U.S. at the Chemistry Department, State University of New York, Stony Brook in 1983, after establishing his international reputation at the Sagami Research Institute in Japan. He was promoted to the rank of University Distinguished Professor in 1995. He served as the Department Chair in 1997-2003, and has been serving as the founding Director of the Institute of Chemical Biology and Drug Discovery (ICB&DD) since 2003. He spent his sabbatical years at the Université Claude Bernard Lyon (1989), University of Tokyo (1996), The Scripps Research Institute (1997) and Université de Paris XI (1997). Dr. Ojima received his Bachelor of Science degree in chemistry in 1968, his Master of Science degree in 1970, and his Ph.D. degree in 1973 all in chemistry from the University of Tokyo.

Dr. Ojima’s field of research in chemistry is exceptionally broad and prolific, exploring multidisciplinary interface of chemistry, biology and medicine. He is a recipient of numerous prestigious awards and honors. For details, please visit https://www.stonybrook.edu/commcms/chemistry/faculty/_faculty-profiles/ojima-iwao.

Following opening greetings by Dr. Masaaki Yamada, FUTI President, Dr. Ojima presented his investigations into the chemistry of natural products, spanning over 25 years, on the occasion of his receiving the 2019 Ernest Guenther Award from the American Chemical Society. His work has been driven by a strong quest for the discovery and development of next-generation taxanes and their highly efficacious tumor-targeted drug delivery. The abstract of his lecture states:

Paclitaxel (Taxol®) and docetaxel are among the most widely used chemotherapeutic drugs against various types of cancer. However, these drugs cause undesirable side effects as well as drug resistance. Therefore, it is essential to develop next-generation taxane anticancer agents with better pharmacological properties and improved activity especially against drug-resistant and metastatic cancers. Our studies have led to the development of numerous highly potent novel second- and third-generation taxanes. The third-generation taxanes show virtually no difference in potency against drug-resistant and drug-sensitive cell lines. Some of the next-generation taxanes also exhibit excellent potency against cancer stem cells, which are the cause of cancer recurrence and metastasis. This lecture concisely presents investigations into taxanes over 25 years based on a strong quest for the discovery and development of next-generation taxanes and their highly efficacious tumor-targeted drug delivery. The critical importance of multidisciplinary research in these endeavors, as well as emerging academia-industry collaborations in drug discovery will also be discussed.

During the presentation and Q & A session, the audience, especially young researchers, asked many questions resulting in a lively exchange of ideas and opinions. A standing ovation followed after he concluded his talk by commenting, “This type of research is highly challenging, but also very exciting. I hope I conveyed some useful messages about new-generation cancer chemotherapy to the audience.  I would also like to stress the critical importance of multidisciplinary research in these endeavors as well as emerging academia-industry collaborations in drug discovery.”