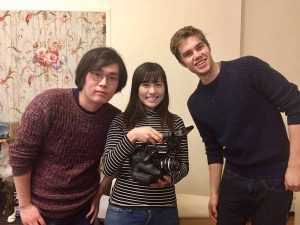 Assignment film shooting: With a classmate (left) and an actor (right)

My third semester at Columbia University film school has started. This June I will be co-writing and producing a script in New York. Also, in the spring semester, I am taking three producing classes which deal with financing, pre-production, and business and two script writing classes in which we write a feature film screenplay and a teleplay.
The feature screenplay which I am developing is about a boy who goes back to the late 1960s and meets his young grandfather who is involved in student activism in the University of Tokyo in 1968. My teleplay is about a young aspiring writer who struggles to get success in New York, while competing with her former classmates in the university. I will complete the first draft of these stories this semester and I will revise them the following year to submit to script competitions and to pitch to producers. 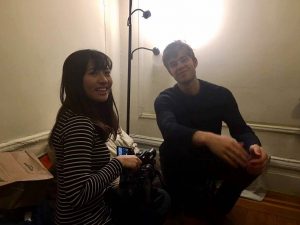 Preparing film shooting: With an actor

There are different types of difficulties in writing these scripts. Writing a Japanese story in English is challenging because of the cultural difference. But also writing a story set in the United States is challenging since I am still figuring out the customs, the habits, and philosophies of this country since I came to New York only one year and a half ago. Writing screenplays demands the writer to understand the culture, build up the character, and learn about the society where the characters live. With help from my professors and classmates, I am writing the stories I want to tell. 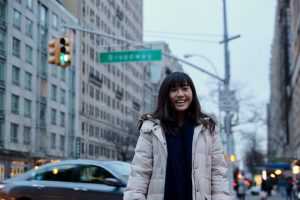 On the way to the campus

In Columbia film school, all the students are encouraged to find the “story to tell” and “one’s own voice.” At the same time with learning about the basic story structure and the rules and tips for screenwriting in general, we learn deeply about how we can put our own experiences in a screenplay or on a screen. Along with the screenwriting classes, one-on-one sessions with the professors, and the help from the classmates, I am writing the scripts. But in addition to these, the international environment that Columbia University offers us works as an important factor in creating the stories. 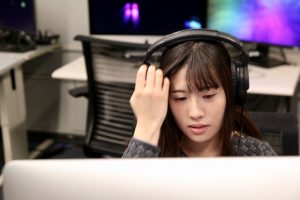 The professors in Columbia film school say that each filmmaker is an entrepreneur. Each film project is different: what the story is, who the cast are, where it is made, how it gets funded, how it is advertised. Also, the goal of the project is different for each project. Some films earn a lot of money worldwide, some films get awards at renowned film festivals and critically acclaimed, and some don’t achieve either of them but are loved by a lot of people. I would like to make films that entertain and encourage people.
While my 65 classmates gather from 24 countries, everyone is a minority. With the liberal atmosphere, everyone shares their idea, experiences, and opinions vigorously, even outside of the classrooms. In that environment, I am always forced to face many opportunities to reconsider my “common sense” and preconceptions which I have nurtured in having lived in Japan for 22 years. It is challenging for me to share the ideas with people from a completely different background, but actually this is a big help in creating a story. I think this is an experience which I could never get if I stayed in Japan to study filmmaking. I sincerely would like to show my gratitude to Ito Foundation U.S.A. and Friends of UTokyo, Inc. who kindly help me to take advantage of this opportunity.
Facebook0
Twitter0
Google+0
LinkedIn0
Pinterest0
FUTI 奨学金