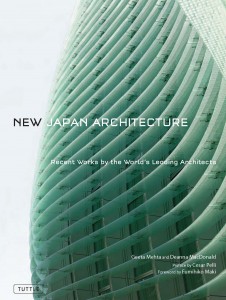 Frank Lloyd Wright once said that Japanese architecture met with Western architecture like a beautiful piece of art meets with a terrible accident. One hundred years later, Japanese architecture design is leading the cutting edge of architecture worldwide. The pure white cubes, daring forms, technological innovation and sustainable techniques drawn from traditional Japanese architecture are influencing a whole new generation of designers, and have been documented in the book “New Japan Architecture: Recent Works by the World’s Leading Architects” (Tuttle Publishing Co.) co-authored by Geeta Mehta and Deanna MacDonald.
Through 48 important projects by 42 established and avant-garde architects, New Japan Architecture takes the reader through a journey of current trends in contemporary Japanese architecture and predicts future directions. While some buildings exhibit the striving for the ultimate Zen design, others exemplify the search for the ‘Wow’ factor in iconic buildings. Cutting edge modernity in some buildings is countered by a revival of Japanese values and concern for sustainability in others. The selection of buildings in the book includes projects that are big and small, private and public, residential and commercial. Informative analysis complements beautiful photographs highlighting the remarkable aspects of each building. The quest for finding the enduring trends in Japanese architecture by the authors was well summed up by Fumihiko Maki, one of the best known Japanese architects, in his Foreword of this book when he said that “Time alone is the final judge of the value of any work of architecture.”
Dr. Geeta Mehta is an Adjunct Professor of Architecture at Columbia University in New York, and a member of the Advisory Committee of FUTI. She lived in Tokyo for 23 years and received her Ph.D. from the University of Tokyo. Her other books with Tuttle Publishers include Japan Style and Japan Houses (2005), Japan Living (2008), and Japan Gardens (2008). Deanna MacDonald is a resident of Tokyo. She received her MA from the Central European University in Prague and her Ph.D. from McGill University in Montreal. She has also written extensively about design in Europe, Asia and Madagascar.
Geeta Mehta and Edward Suzuki, a well-known Japanese architect also featured in the book, held a dialogue session at the Japan Society New York at the event of the book launch held on November 10, 2011.