Editor’s Note: Why do most of us, the Japanese, speak “Katakana English,” despite that we have been studying English since childhood and/or have been in the U.S. for many years? We find a convincing answer to this question in this essay by Dr. Shigenori Matsushita that appeared in his mail magazine on September 6, 2013. The presenters of the Tokyo Bidding Team for the 2020 Summer Olympic Games must have received a crash course by a coach who knows this “Science of Vowels.” This is the second time that we get his permission to reproduce an article in his mail magazine “Utsusemi.” <http://club.pep.ne.jp/~shigmats.1/utusindx.htm> His article “Your expression of gratitude to your alma mater in accordance with your financial means (in Japanese only)” appeared in our newsletter No. 6 issue.

The typical accent of English spoken by the Japanese is sometimes called “Katakana English” because English pronunciation is substituted by that of a Japanese Katakana letter, which represents one of the simplest pronunciations in the world. Vowels seem to be the key for getting rid of Katakana English, because consonants are generally easier to pronounce. English consonants without corresponding ones in Japanese, namely “th”, “f/v”, “l” and “wh”, are taught in schools and are relatively easy to learn. Besides, Japanese “t”, unlike English “t”, has the tongue closely attached to the upper jaw and Japanese “w” doesn’t have the lips rounded. But English “t” and “w” could be substituted by Japanese consonants without sounding too strange. One major problem, however, is the misunderstanding by most Japanese people that “r” in English must be the same consonant as in “Ringo”, or apple, in Japanese, because it is the right way of writing in the Romanized Japanese. 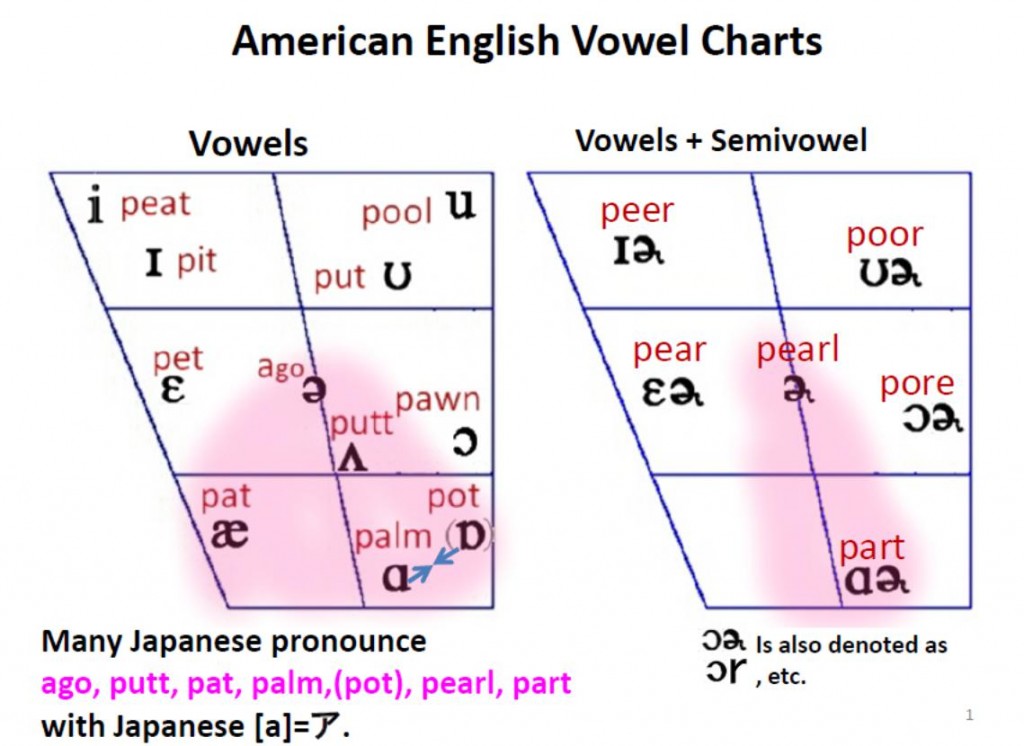 The consonant of “r” in Japanese is unique. The tongue touches the upper jaw to stop the breath for a moment and then vibrates when the breath is released. There are two ways to pronounce “r” in American English, say (a) and (b). Native speakers of American English are not necessarily conscious of the difference, but in either case, the tongue never touches the upper jaw. In (a), the tip of the tongue is rolled up, while in (b), the both sides of the inner tongue touch the upper back teeth and tongue tip is lowered near the lower front teeth. For Japanese people, (a) is easier, but (b) seems more prevalent among Americans. When “l” comes right after “r” as in “girl”, (b) is easier for movement of the tongue tip. In the standard British English called “Received Pronunciation“, “r” as in “girl” or “park” is not pronounced, but it is pronounced in American English. Immigrants from Scotland and Ireland, who spoke older English pronouncing “r”, crossed the Appalachian and spread from the Midwest to the West, and their language ultimately became the standard American English called “General American“.
In phonetics, the vowel is defined as a continuous voiced sound with open vocal tract without any hindrance to the breath. The English consonant “r”, an approximant with the breath through a narrowed tract, is also called a semivowel, like “y” and “w”, because they are all narrowed vowels in a sense. The Japanese “r” is not an approximant nor a semivowel.
The standard Japanese, like Spanish and Italian, has only five vowels; [a], [i], [u], [e] and [o]. It used to have only four vowels in the prehistorical influence of Polynesian immigrants originating in Taiwan, and then the number increased to five. In the era of Man~yogana (or Man~yokana) before the eighth century, eight vowels were strictly differentiated as influenced by immigrants from the continent, namely [a], [i]1, [i]2, [u], [e]1, [e]2, [o]1 and [o]2. Subsequently, Man~yoganas were misused and the number of vowels was ultimately reduced to the current five in the Heian period when phonetic Hiragana (or Hirakana) was established.
In phonetics, vowels are positioned on the so called vowel chart. In the Japanese language, [i] and [e] are called “high vowels (closed vowels)”, because the tongue comes high near the upper jaw. In pronunciation of [i], the tongue shifts forward to make a smaller space between the tongue and the lips. Therefore, [i] is called the “high front vowel” and positioned at the upper left corner of the vowel chart. On the other hand, in the case of [u], the tongue shifts backward to make a bigger space between the tongue and the lips, and [u] is called the “high back vowel” and positioned at the upper right corner of the vowel chart. The vowel [a] is the “low vowel (open vowel)“, without front or back, and positioned at the bottom of the vowel chart. The phonetics defines the semi-high and semi-low vowels in between, but the Japanese language has only two more vowels; [e] as the “middle front vowel” and [o] as the “middle back vowel”. Namely, Japanese vowels are fewer and represent wider areas on the chart. On the other hand, English vowels are more numerous and represent smaller areas (see Figure 1).
When frequency components of vowels are analyzed, the basic frequency, which is the basic pitch of the voice, and its harmonic frequencies are detected. Among harmonics, the first formant “F1” is a group of harmonics corresponding to resonance between the voice cords and the tongue, and the second formant “F2” is that between the tongue and the lips. A graph. with F1 as the vertical axis and F2 as the horizontal axis in an appropriate scale, illustrates vowels in similar positions to those in the vowel chart above (see Figure 2) .
On the vowel chart, five Japanese vowels are positioned, while eleven vowels are placed in the case of American English (Figure 1, left). In addition, American English has six additional sounds of vowels combined with the semivowel of “r” as in “girl” and “park” (Figure 1, right). Among seventeen vowels in total, as many as seven are all substituted by a single Japanese vowel of [a] in the typical Katakana English. Those seven are the vowels of “ago” (the first vowel), “putt”, “pat”, “palm”, “pot”, “pearl”, and “part”. Many Japanese pronounce “pot” with the vowel [o], but the same vowel in “not” and “body” is often pronounced with [a]. 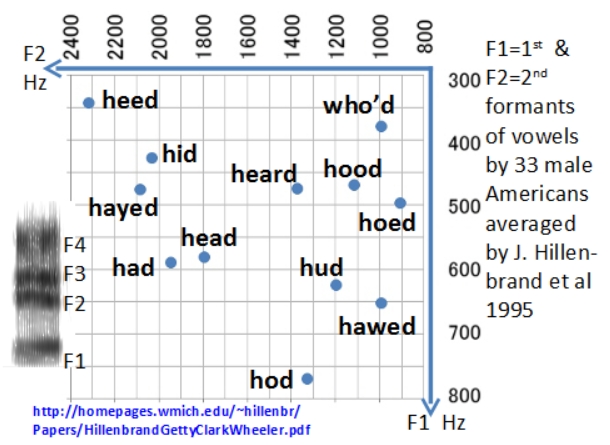 Many Japanese learn to pronounce the word “can” as [kyan]. But the vowel of “can” should be the one between Japanese [a] and [e] as in “pat”, “ham” and “mat”. Many Japanese wrongly believe that the only difference between “peat” and “pit” or “leave” and “live” is the duration (or time length) of the vowel. The Japanese people, unlike native English speakers, are sensitive to the time length of vowels because the Japanese language is spoken in precise beats almost like a metronome. A single beat [o] means a “tail”, while double beats [oo] mean a “king”. Japanese spoken out of beat makes for a foreigner like Japanese. As a matter of fact, pronunciations of “peat” and “pit” are different in their vowels as well as in their lengths. The vowel in “peat” or “leave” can be long [i] in Japanese, but that in “pit” or “live” is a vowel in the middle between Japanese [i] and [e]. Which difference, the difference in lengths or the difference in vowels, is more important ? According to my experiments, Americans seem to differentiate “peat” and “pit”, or “leave” and “live”, more by the vowel than by the length. Similar is the difference between “pool” and “pull”. The vowel of “pool” is longer with the round lip [u], whereas that of “pull” is a shorter vowel between Japanese [u] and [o].
One of the most important points in getting rid of Katakana English is to pronounce “girl”, “early”, “hurdle”, “Earl Grey” and so on with “r” in the American way. But this pronunciation is not well taught in Japan, because most English teachers in Japan themselves can not pronounce them properly.
Some Japanese say, “Japanese English should be accepted since we are Japanese. Look! Americans listened to Einstein’s English with his German accent.” Well, anybody will listen to English with any accents if what is talked about is excellent. In reality, however, whether in inviting Olympic Games or in pitching a product, English and the substance should make up for each other in most cases. Katakana English is at a disadvantage.