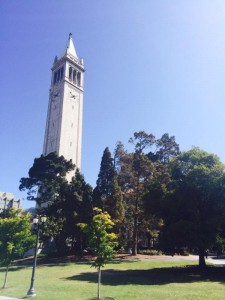 Thanks to the huge support from FUTI, I had the great opportunity to participate in a summer session at UCBerkeley, the top public school in the United States. Thank you very much.
During the three weeks I spent in the school, I had a lot of fun in both studying and at leisure. In this paper, I would like to share some of my experiences during my program.
From July 27th to August 14th, I attended the 2015 Summer School program at UCBerkely. In this program I took three courses which were “Race and American Humor”, “Race and Representation in US culture” and “ Race and American Film”. As one may notice, all of them are related to racism, an issue still controversial in the States. Because this is a very sensitive issue, I thought it would be difficult for me, or anyone else to handle at the beginning. If you look at the history of United States, it is more obvious. Many people in the United States suffered and, at the extreme, were murdered due to the power of racism over society. And here comes a tall man who is a nerd in mathematics and know almost nothing about racism: me. Although I wouldn’t be able to solve any of the problems that had been raised on the course, I did learnt a lot meaningful which polished my thought process and deepened my understanding on this topic. 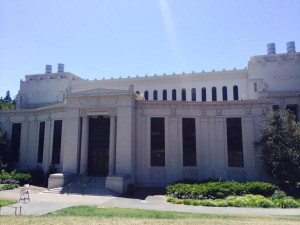 First, in the “Race and American Humor” class, we tried to understand the role which humor plays in the social structure. For me, the approach to analyze this social dynamics was extremely interesting. At the start of the class, we gave definition for what is to be “humor” and what is “race”. Unlike my previous understanding, “humor” is defined as “having social power dynamic to critique ‘upper’ class”. And race, according to professor, is not something fixed nor something essential; on the contrary it is a flexible thing. It can be defined through different interests and by different group of people; it symbolizes social conflict.(“white supremacism” is a neat example for this.) Therefore it is always subjected to change. What I learned is that many forms of humor embedded in the American society challenge the existing social classification by way of exaggeration and express this in the form of jokes. In addition to this, humors can console people since it can take the forms of storytelling, which was another surprising fact for me.
Secondly, in “Race and American Film” class, we tried to uncover how racism is expressed in films like “ Birth of a Nation”, “The Searchers” and “Do the Right Thing”. All the films came from a different time and reflects racism from a different angle. “Birth of a Nation” was on screen in 1920s, “The Searchers” was on in the 1960s and “”Do the Right Thing” was filmed in 1980s. For the purpose of this report, I will just discuss “Birth of a Nation”, as it was the “master piece” for our course. “Birth of a Nation” came right after the invention of filming technology. Before then, the general public could only afford to see disconnected images in the form of photographs. Continuous images, or films, were first available to public in the early 1900s and were greatly welcomed. They enabled people to share experiences, and here is where the racist projections were formed. Taking the example of “Birth of a Nation”, White people were depicted as polite, pure and sophisticated, whereas colored people were portrayed as childish, misbehaved and uncivilized. It successfully conveyed these kinds of images to a large number of people, resulting in further strengthening discrimination. What was interesting for me in this class was the revelation that movies could be a great weapon for pushing the idea of racism forward if used poorly and vice versa. History has witnessed that after the movie, many people joined KKK and supported the idea of “white supremacism”. I never imagined that one film could have such an enormous power to change the way society thinks.
The third class I took was “Race and Representation in US culture”, in which we studied all sorts of visual arts. In the class we went through many photographs and tried to analyze the hidden meaning behind them. Let me give you some examples for this. In the class, we look at a photograph taken in 1905 at San Francisco’s China town. At the first sight one would only assume that this expressed a normal, ordinary day for Chinese children in American society, but there are a lot of hidden meanings in the photograph besides. Beginning in the late 1850s, Chinese immigrants in the western United States faced a severe anti-Chinese sentiment. During this time, the number of immigrants moving to America increased because of the labor shortage in the projects like the transcontinental railroad .The result of the increasing number of Chinese immigrants was that highly competitiveness in labor force. An enormous number of U.S. citizens people living in the area (they were almost white people) had to suffer from losing their job. Because of this, Chinese are subjected to restricted entry form 1870 until the 1940s. Giving this context we could see that the photograph is not only depicting a normal daily image of that certain time period but also implying hostile attitude Americans took toward Chinese.
Sure enough, all of the courses provided brand-new insight. Given that I am a science student back in UTokyo, I have had almost no encounters with humanitarian ways of approaching to existing problems. I was deeply moved by number of insights that my UCBerkeley professors could bring from one subject and broaden to larger topics, such as racism. Secondly, by studying sensitive topics with people from different background, and discussing it with an open mind, I grabbed some pieces of pre-requisite knowledge need to understand American culture.
I also 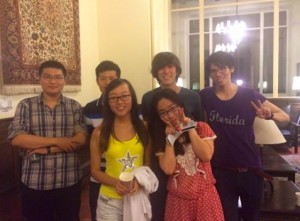 experienced some of the differences between the educational system between Japan and the US. The classes in UCBerkeley were very different compared to those of UTokyo. In UCBerkeley students were literally “in” to the class. We had many conversations and interactions going on, both during and outside the class. For example, through a system called office hours, students had the opportunity to visit professors directly and ask questions about the courses they were taking. This helped us to more better understand the subjects we were studying. It surely helped us understand more about the subject we were trying to understand.
We could get motivated through talking, discussing and attending the class. What’s more, I think the way classes structured were just right. We had three professors, an American, an Indian and an African American. Since they all came from different subset of group, I was able to gain different perspective from all of them. Professors always cared about whether students were getting inspired and relating the knowledge between each courses, which was good because I believe by connecting the knowledge we gained in one field and apply it to another field, we can have deeper understanding.
Of course during the weekend, I had so much fun with my friends from UTokyo and UCBerkeley students. The weather in the San Francisco Bay Area was extremely good and we went to many places. Fisherman wharf , Golden Gate Bridge, Japanese town…the list can go on for pages. Every weekend we hang out and played a lot. On one weekend I joined a international party held by I-house, and I made one friend from Duke University’s math major. We had endless conversation about our fields of interest.

Discussing mathematics in English made me realize our shared knowledge can be a very strong bond in building relationships with people from different countries. Other times I went out with my room mates. Despite the fact that I couldn’t always convey my ideas or feelings in English (partly because of my lack of knowledge in speaking English), we still engaged in a lot of very effective and heat discussions, especially in topics on Japanese games. (I haven’t been more greatful to Japanese games ) I also got in touch with my senior who is currently working at Twitter and I visited him during my stay. He showed me around the office and offered concrete idea of what is going on in America. It surely helped me to think about my future career.
The summer school lasted for just three weeks. However, I think I have experienced and learned lots of new things that will have a profound impact on the rest of my life. What it is like to live in the States, what it is to like to be a student in UCBerkeley and what it is like to live with other people who have different cultural backgrounds etc,. The memories are truly precious to me. However, I am pretty sure that I couldn’t have gotten these if FUTI hadn’t supported me this time. I appreciate it very much. I would make good use of this experience to be a “Tough and Global ” person. Thank you very much indeed.