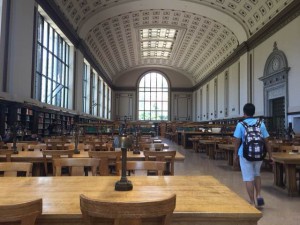 Inside the main library of UC Berkeley

Thanks to  the award of FUTI, I could have fruitful days in California, joining Berkeley Summer Session from July 5 to August 15. I took the session for international students to improve English skill.
I had two main objectives to join this session: To increase my practical English speaking skill, and to understand the difference of behavior and values between Japanese students and other students from various countries. 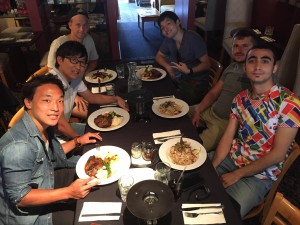 Inside the restaurant in Berkeley with classmates

During summer session, I took two classes. First one is “Business Speaking” where I made discussion, presentation in terms of business issues. In addition to in-class tasks, I had out-class activities in this course such as visiting companies and researching management of retail stores. What impressed me especially was a company visit to SFPUC(San Francisco Public Utilities Commission) which managed water supply in San Francisco. In this visit, I could have opportunity to discuss with a manager of a company and I could learn how SFPUC  managed the risk of huge drought in San Francisco, and there were still controversial issues among the company which would like to raise rate of water and civilians who would not like to pay more rate for water.
As for the second class, I took “Conflict Resolution”, in which I could learn communication skill how to intermediate various kinds of conflicts. For the resolution of conflicts, we have to follow certain principles of discussing what each party want. To me, non native English speaker, it was really tough work to grasp the interests which resides in conflicts through communication with stakeholders, but I could understand that practical communication skill require patient practice of following principles.
In addition to classes, I could learn a lot from daily lives in Berkeley. 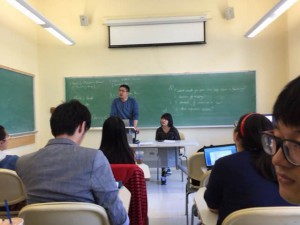 In the class room of “Business Speaking”, making presentation to other students

I lived in a small dormitory where about 30 people lived. I had 2 roommates, both of who were native speaker, so I could have a lot of stimulation from them in terms of English. Furthermore, both of them try to take Bachelor of Science in UC Berkeley and engage in laboratory to support the research and studied quite hard with aspiration to have the big project work in practice, which also made me impressed.
Through communicating with native speakers like my roommates, I could find how generous they were against non native speakers like me.
I think it wasn’t as comfortable for native speakers to talk to me as friends of native speakers in terms of English skills. However, they were not reluctant to talk to me at all, but they talk with me and share knowledge and feelings. Looking back my daily life in the University of Tokyo, I think I didn’t have such an open mind as them, so I made up my mind to become more open to international students in my university. 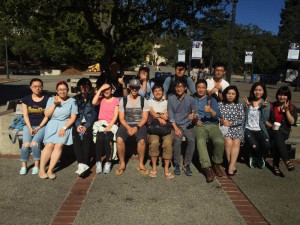 Also, I made friends with a lot of international students from various countries such as China,Korea,Taiwan, Brazil,Denmark,Azerbaijan,Latvia,and so on.  I spent my time as much as possible with these friends, chatting and discussing various kinds of topics over lunch, dinner, and a cup of coffee.
To be honest, it was first time to communicate with people with such various background at the same time, so it took me a little bit confused how to react to conversation or behavior of each person at first. This happened especially when I made discussion with my classmates.  Because we have different way of expressing opinions, sometimes we had certain kind of conflicts. For example, Japanese students tend to express their opinion implicitly, thinking making harmony is important while Indian guys tend to make their opinions explicitly, thinking expressing ideas as many as possible means high contribution. Through these struggle, I could become conscious of difference of  communication style, and try to take into account of it, which was part of my important point to learn.
Now that I could learn a lot of things through this summer session, I’d like to make use of it by communicating with more international students in the University of Tokyo, and sharing my idea and feeling with more appropriate manner in English.  In fact, there are many opportunities to communicate with international students in the University of Tokyo, not to say as many as those in UC Berkeley. To utilize these opportunities and broaden understanding of perception and values of people from various background,
I’m eager to keep active to get in touch with international students.
Finally, I really appreciate to Friends of UTokyo, Inc for enormous support. Without support from FUTI, I couldn’t realize this study abroad with precious experience.
Facebook0
Twitter0
Google+0
LinkedIn0
Pinterest0
FUTI 奨学金