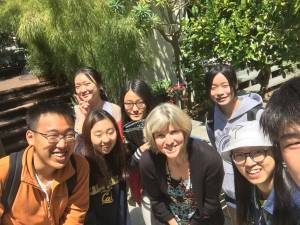 With a generous support from Friends of UTokyo, Inc, I spent an unforgettable summer at University of California, Berkeley. In this report, I would like to share my experience.
The main purposes of participating in this program were to improve my English skill and to widen my view of my research field. To fulfill these purposes, I attended two classes during the program; one was about “Conflict Resolution” and the other was about “Clinical Psychology”. 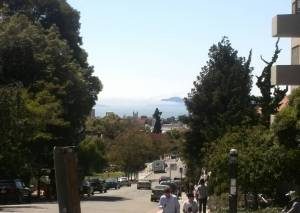 Actually, there are countless number of conflicts in the world, range from neighborhood quarrels to conflicts between countries. In the former class, we learned skills to solve conflicts as parties, as a conflict coach, and as a mediator. At the last day of this class, we had a role-play of mediation. One imaginary conflict situation between two parties was set and I tried to help them solve it as a mediator. Using some technique such as I-messages (don’t use the word “you” when you express your own feeling caused by other person’s behavior) and active listening (paraphrase what the parties say and figure out their underlying feelings and needs), I somehow managed to mediate the conflict. Finally, I had impression that my words were helping them to reach an agreement. Although this class was one of the ESL classes, it was not for learning vocabulary, pronunciation, listening, speaking or writing, but for learning how words can be used to help people. I believe that skills and ideas I learned in this class would be useful in my daily life. After the class, I became eager to learn more about mediation in Japan. We cannot ignore cultural differences in skills of solving conflicts. I’m now curious about how mediation skills are taught in Japan. Furthermore, in this class, I had a chance to visit small claim court in San Francisco as a field work. I had never thought I would be visiting a court in America before having a chance to visit one in Japan. Sitting at the public gallery, I could see real-life claims and solving processes in the US law system. It was a quite interesting experience for me.
In the Clinical Psychology class, I learned about various psychological disorders focusing on real cases. In addition to learning from a textbook, we did self-monitoring and functional analysis, which helped us to learn the mechanisms of psychological disorders. What impressed me most was the class style. About a half of the class time was spent for discussion. Students were encouraged to express their opinions in the class. Since the students in this class were from all over the world, we could have a discussion referring to the cultural differences. It was interesting to know about social supporting systems and the ways psychological disorders are treated in other countries. 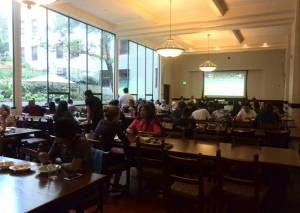 Outside the class, I enjoyed spending time with my new friends. I visited a lot of places including Yosemite, Oakland museum, and Oracle Arena, but what attracted me most was playing basketball with them. There was a gym which all students can freely use, and I often went there to play basketball. Every time I went, I could meet new people. Once we played together, we could become friends very soon. I had a feeling that sport is a common language.
I would like to emphasize that one of the greatest opportunities I had in this summer program was to meet lots of students who were around my age and had totally different backgrounds. It impressed me a lot that most of them told me they like Japanese cultures such as foods, animation, and history. I thought back of myself and found that I had only a little knowledge of other countries. By knowing different life-styles in their home countries and policies about their lives, I could widen my view of career choices in the future.
After this program, I felt a strong desire to visit new places and to meet new people. I am really grateful to Friends of UTokyo, Inc for their enormous support. Thank you very much.