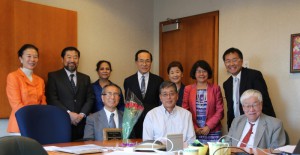 Board members present: Hisashi Kobayashi, Ken Furuya, Yuichiro Kuwama, Masaaki Yamada, Sumiko Ito, Koichi Hamada, Shigenori Matsushita
Others present: Shuta Kobayashi, Masako Osako, Fumiko Tamura
FUTI’s Annual Board of Directors meeting was held at the UTokyo New York office in New York, commencing at 10 am on September 19, 2015.
After President Hisashi Kobayashi’s welcome greeting, Mr. Shuta Kobayashi, Secretary, presented the minutes of the Annual Board meetings held on September 28, 2014 and March 10, 2015. The minutes were unanimously approved by the Board.
Prof. K. Furuya provided updates on various topics related to UTokyo, including: the policy declaration of President Makoto Gonokami, 30th president of UTokyo, the new academic calendar year starting from AY2015, and the University’s globalization efforts such as academic exchange programs, overseas offices in UTokyo, and construction of a global campus model (See slides “UTokyo Today”)
Dr. Yuichiro Kuwama, Director and Treasurer, assisted by Ms. F.Tamura, reported the financial results for FY 14/15 based on the materials presented to the board members (including a draft of the current year financial statements).  The analysis is summarized as follows:

Dr. Kuwama reported that FUTI’s agreement with the Shintech Trust was renewed for another five years beginning in 2015
The budget report and analysis were unanimously approved by the Board.
Dr. Masaaki Yamada, Director of University Relations, reported an overview of the 2015 recipients of FUTI Research Collaboration Funds, the IPMU program and the Columbia-UTokyo exchange program as well as the FUTI Scholarship Awards.

It was generally agreed that the scope of the FUTI Research Collaboration Fund should be expanded to other academic disciplines.
He also reported the status of a new proposal which aims for support of long term visiting and exchange studies. More detailed reports and discussions were made during the joint Board-Advisory Committee meeting in the afternoon.
General Discussions:

Participants: Board of Directors; M. Yamada, K. Furuya, S. Ito, H. Kobayashi, Y. Kuwama, K.Hamada, and S. Matsushita: Advisory Committee Members; Nobuko Sakurai, Shunichiro Kishioka, Geeta Mehta, Fumiko Tamura; Other participants; Shuta Kobayashi, Masako Osako
Report on FUTI Award Recipients’ Experience
During lunch, Dr. M. Osako presented a slide presentation titled, “FUTI Award Recipients’ Reports.“ She also revisited the 2014 Kokusai Koryuka survey’s findings: 68% of survey UTokyo students agreed, ”I was unaware of the existence of FUTI” and 59% , “I thought my chance of winning would be too slim.”
She proposed more intensive outreach efforts (including direct mail to UTokyo professors) for the first issue. Regarding the second issue, she reported that FUTI does not require any specific score level for TOEFL or other English language proficiency tests, even though it requires the applicant’s score to meet the requirement imposed by the program he or she is applying to. She also suggested we may re-evaluate our selection criteria regarding the weight we assign on the course grades from the perspective of our mission, ”fostering of global leaders.” Board members voiced the importance of incorporating “Ningen ryoku,” (roughly translated into strength of character) in the selection process in certain types of program.
A good part of the joint meeting was dedicated to briefing the Advisory Committee members on the topics reported by Mr. K. Furuya, Mr. M. Yamada, Mr. Y. Kuwama, and Ms. F. Tamura at the Board meeting in the morning.
Then a sizable amount of time was dedicated to discussions regarding a a new proposed long term scholarship

More specific detail will be determined through discussions with a sponsor.
The participants then engaged in discussion on various topics related to FUTI, such as the FUTI’s relationship with UTokyo alumni associations and 2015-16 lecture series.
The meeting was adjourned at 5.00 pm.