The Annual Board and Advisory Committee Meeting Held 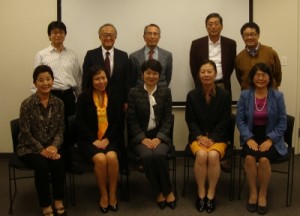 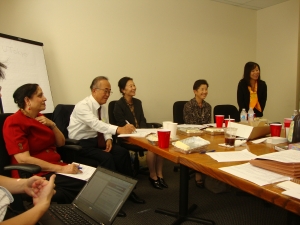 Dr. Masaaki Yamada, Director of University Relations, reported on the 2013 summer scholarship programs, and research grant programs (For details see related articles in this newsletter). Dr. Masako Osako, FUTI staff, reported on the following three programs that UTokyo has recently introduced as part of its effort for globalization: PEAK(Programs in English at Komaba), UTokyo Innovation Summer Program, and “Taiken” Program. A majority of the Board members felt favorably about these programs, but their opinion is divided whether or not FUTI should provide financial support to participants in these programs. As for PEAK, most Board members felt that more information concerning the number of applicants from the  U.S. and their quality ought to be obtained before we can start evaluating the program.
In the afternoon, a joint meeting between the Board and Advisory Committee (AC) was held. Following the report by Dr. Masaaki Yamada on the summer scholarship and research grant programs, Mr. Benjamin Frandsen, a Ph.D. student showed the video presentation of the Columbia-UTokyo curriculum development on “Frontiers of Condensed Matter Physics” prerecorded by Prof. Yasutomo Uemura (see video below).

Message to Friends of UTokyo, Inc from Prof. Yasumoto Uemura
The rest of the joint meeting was spent in briefing the AC members on the topics reported by Dr. Egawa, Dr. Kuwama and Dr. Osako at the Board meeting in the morning. In addition Mr. Shuta Kobayashi, Secretary, reported on the revised Bylaws, which defined the roles of the Advisory Committee and Special Committees (e.g., the Award Committee).
In the final session the Board reappointed the current officers and directors and advisory members (including the newly appointed Dr. Tamura) for another year. Dr. Shigenori Matsushita was appointed as a new member of the Award Committee.

The following topics were reported by Dr. Masako Egawa at both Board meeting and at the Joint Meeting with the AC members: