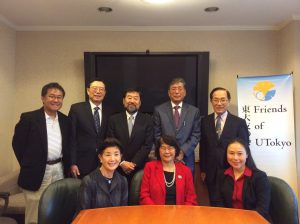 FUTI Annual Board and Advisory Committee Joint Meeting, October 1 (Sat), 12 pm-5pm
Board members present: Masaaki Yamada (chair), Ken Furuya, Yuichiro Kuwama, Shigenori Matsushita, Nobuko Sakurai, Fumiko Tamura
Advisory Committee (AC) member present: Iwao Ojima
Other present: Masako Osako
FUTI’s Annual Board and Advisory Committee joint meeting was held at the UTokyo New York office in New York, commencing at 12pm on October 1, 2016.
After President Masaaki Yamada’s welcome greeting, Ms. Masako Osako, acting Secretary, presented the minutes of the Annual Board meetings held on September 19, 2015 and May 9, 2016. The minutes were unanimously approved by the Board.
▪        UTokyo Today
Mr. K. Furuya provided updates on various topics related to UTokyo, including: The UTokyo Vision 2020 (recently announced by President Makoto Gonokami, president of UTokyo), its various activities toward the future (such as the UTokyo Sports Science Initiative), and its globalization efforts such as academic exchange programs and construction of a global campus model.  (See slides “UTokyo Today”)
▪        Financial Statements for FY 15/16 and Related Items
Mr. Kuwama and Ms. Tamura reported the financial results for FY 15/16 based on the materials presented to the board members. The analysis is summarized as follows:

Board members approved the financial analysis and thanked Dr. Kuwama and Ms. Tamura for it.
▪        Scholarship and Research Grant Programs
Mr. S. Matsushita, chair of the Scholarship Committee, provided updates of the FUTI’s 2016 Global Leadership Program and the Ito USA-FUTI Scholarship program. He also commented:

Mr. Yamada provided updates on FUTI’s grant programs which included an overview of the 2016 recipients, namely, the IPMU (UC Berkeley -UTokyo) program and the Columbia-UTokyo program. He also reported that FUTI provided a travel grant ($7K) this year for the first time to support Yale-UTokyo exchange of scholars under the Yamakawa Kenjiro Memorial Lecture series.
Note: for further details on FUTI scholarship programs, please visit here and here.
▪        Report by the AC Committee
In the absence of Mr. H. Kobayashi (chair of AC), Mr. M. Yamada reported on the activities of the AC in the FY 2015-16 and changes of the AC members. Ms. Sakurai and Ms.Tamura, formerly AC members, became Board members and Mr. Ojima joined the Committee as a new member.
▪        Report on FUTI’s Relationship with Alumni Groups
Ms. M. Osako gave a presentation titled “FUTI and UTokyo Alumni Group: Establishing a Mutually Beneficial Relationship” and recommended that we explore opportunities for closer relationships with alumni groups.
▪        General Discussion