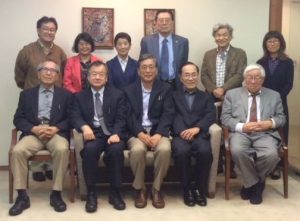 FUTI’s Annual Board and Advisory Committee joint meeting was held at the UTokyo New York office in New York, commencing at 12pm on October 1, 2017.
After welcome greetings, Mr. M. Yamada (chair) introduced Mr. N. Matsuki, Executive Vice President of the University of Tokyo and two new ex-officio members of the Advisory Committee, Ms. Y. Suzuki (President of Satsukikai Amerika) and Mr. K. Karasaki (President of San Francisco Akamon-kai).
Ms. Osako, acting Secretary, presented the minutes of the Annual Board meetings held on October 1, 2016 and April 23, 2017. The minutes were unanimously approved by the Board.

Mr. Matsuki provided updates on various topics related to UTokyo, including the subjects: (1) the university at its 140th anniversary, (2) recent designation as one of the “National Universities of excellence” (指定国立大学), (3) the recent declining (46th) position in the Times Higher Education Raking, and (4) the completion of the university library’s annex in July 2017. After the present status of the university, Mr. Matsuki stressed President Gonokami’s aspiration/hope that the UTokyo will contribute to the future of the globe and the mankind in a significant way.(See slides “Recent Developments at UTokyo” [in Japanese])

Board members thanked Mr. Kuwama and approved the analysis.

Dr. Matsushita explained the Public Support Ratio (33.3%) issues involved in FUTI’s requests for donation from Ito Foundation U.S.A. (the Foundation). After discussing several options, the participants agreed with the following conclusion.
The Board will review the financial plan of FUTI in relation to the public support ratio and make a decision each year as to the solicitation of gift from the Foundation. The recommended strategy includes i) to keep the ratio higher than 1/3 as long as possible, and ii) hopefully to make the ratio gradually improve through FUTI’s effort to increase general public donations at all categories (that is., small, medium to large donations).

Mr. M. Yamada provided updates on FUTI’s grant programs including an overview of the 2017-2018 recipients, the Columbia-UTokyo program and the Yale-UTokyo exchange of scholars under Yamakawa Kenjiro Memorial Lecture series.

Mr. Yamada began this segment of the meeting by saying “giving as many as 30 scholarships in 2017, FUTI is experiencing a growing pain and needs some operational adjustments.” Several operational issues were discussed including the following:

In view of the growing size and complexity of FUTI’s operations, the board recommended that FUTI requests Amy Iwazumi to handle certain book keeping and record keeping tasks, while Mr. Kuwama would continue to handle certain responsibilities which he is best suited to perform. In addition, Mrs. Sakurai kindly offered to help Mr. Kuwama for writing thank-you letters to donors.

Mr. Yamada reported that in early September a few FUTI staff visited two accounting firms. FUTI is in the middle of evaluating these and other firms in terms of the depth of their expertise in non-profit accounting, the quality of customer service, and costs. FUTI hopes to make a decision shortly on the accounting firm.

Mr. H. Kobayashi, chair of the AC Committee, expressed his pleasure for having two ex-officio members Y. Suzuki and K. Karasaki join the FUTI Board/AC meeting. He remarked “I hope that their involvements will help their organization members better understand FUTI’s activities and needs.  We would like to have the presidents of other UTokyo alumni groups in the U.S. to join the Advisory Committee as new members.” Mr. Karasaki commented that (1) membership qualifications for his association is flexible and is not confined to alumni of UTokyo—anyone who is interested in the university can become a member, and 2) that he will start soliciting donations to FUTI among his group’s members.