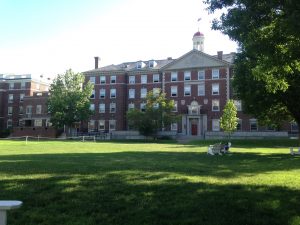 This summer I studied at Harvard Summer School in virtue of the generous support of FUTI. This was my first experience of studying in the US, and therefore found this experience to be one of the biggest challenges of my life, especially because I took the class of American foreign policy, which is quite different from my major, plant biotechnology. Even though the session was only three weeks long, various aspects of HSS made this summer unforgettable one. 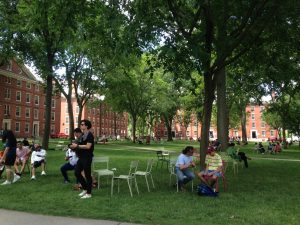 Despite studying a subject distinct from my major, I decided to take the class of American foreign policy mainly because I felt I needed to learn more about what was going on in the United States and what American people think about their newly elected President. After seeing so many upheavals and controversies before and after the presidential election in 2016, I realized I did not know anything about the most influential country in the world. I always made my major in the natural sciences an excuse to be indifferent about politics and world affairs.
This is why I chose to study American foreign policy at HSS; but I have to confess that the class was well beyond my expectation in several ways. First of all, I was so overwhelmed by the huge workload of the class. In addition to the massive amount of reading assignments given every class, we had to take a mid-term and final exam. On top of that, we had to hand in a paper with a minimum page count of 10 in less than 3 weeks. Though I did not have enough time to fully enjoy sightseeing in Boston because of the aforementioned workload, I still enjoyed the class as I learned a lot of things with the devoted help of my professor and the TA. I learned not only new knowledge about American foreign policy and international relations, but also many ideas and perspectives on building good discussions in class, developing convincing arguments in my expository writing and so on. I also learned a lot from my colleagues through active discussions in class. Their flexible and deep ways of thinking inspired me a lot, and I was moved by many ideas from various perspectives. Overall, I feel I was able to learn many important skills through this class. The fact that I somehow survived this intensive class and also got satisfactory grades gave me a big boost of confidence. 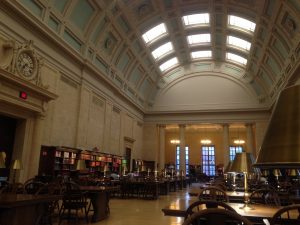 Although I was busy with massive workloads of the class throughout the summer school, I also enjoyed other aspects of my student life at Harvard. This was also my first time to stay at a student dormitory. Therefore, I enjoyed every aspect in the dormitory life. What was great about living in the dormitory was that I got to know so many students from around the world. I met students from more than 20 countries just in three weeks, and I enjoyed the small chats I had over every meal. I made very good memories hanging out with my good friends from the dorms and going to the local dance party and beaches despite the busy schedule.
Last but not least, I would like to express my deepest gratitude to FUTI scholarship award, which gave me this incredible opportunity of better myself.