A Report on the Ito Foundation U.S.A.-FUTI Scholarship Online Get-Together 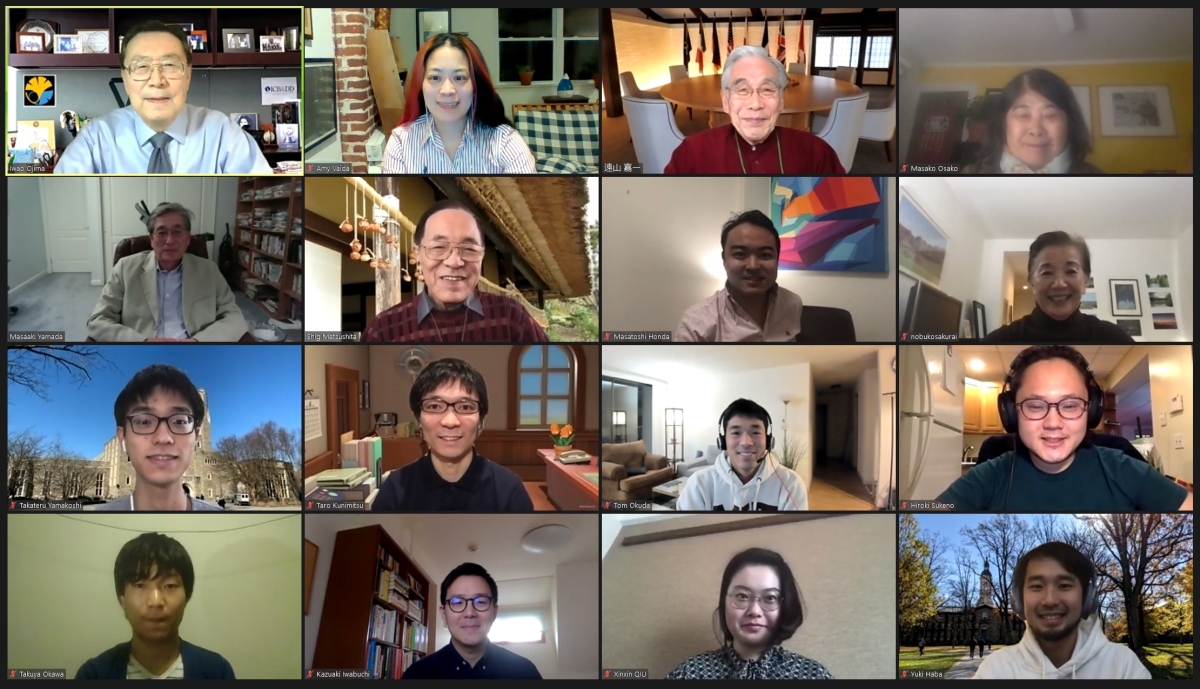 The first meeting on December 4 began with a greeting given by President Ojima where he emphasized the importance of FUTI’s mission of nurturing the next generation of leaders to bring societal unity in a time when society is destabilized by COVID-19 and the US presidential election.

Yoshikazu Tohyama of the Ito Foundation then gave a brief history of the Ito Foundation and spoke of its mission. It was founded by the former president of Seven & i Holdings, Masatoshi Ito, to give back to society and show gratitude for the financial support he received as a youth for his education, in a time when all of Japan was impoverished. This support gave him the driving force to success. The Ito Foundation has already awarded more than a thousand scholarships, and with the Ito Foundation U.S.A.-FUTI Scholarship they hope that the recipients not only delve in their studies but to learn other cultures, meet people and expand their network, and never forget the feeling of gratitude.

After the greetings, a recipient from the first year of the Ito Foundation U.S.A.-FUTI Scholarship, Eri Furusawa, and seven of the 2019-2020 Scholarship recipients, spoke of their current situation and activities. At the end, Yuki Haba gave a greeting as a representative of the FUTI Alumni Association.

After receiving her master’s degree in Urban Planning at the Columbia GSAPP, Eri Furusawa (2016-2017 Scholarship recipient) worked in the New York City Department of City Planning and at HR&A Advisors, Inc., and spoke of her experience:

I chose architecture for my undergraduate studies at the University of Tokyo. As I learned more about architectural design, however, my interest gradually shifted from the site-specific design (designing a specific building on a predetermined site) to urban policy (designing what gets built in the first place), which led me to pursue Urban Planning as my major for graduate school. At the New York City Department of City Planning, my first job after graduating from Columbia, I supported the City’s zoning amendments through scenario modeling and hosting public meetings. My passion in public policy and community engagement led me to my current position at HR&A Advisors, Inc., an urban policy and economic development consulting firm based in New York. Currently, I work on multiple projects related to inclusive community engagement that reflect the needs of residents. Lately, in the wake of the Black Lives Matter movement, I have sought to strengthen my understanding of the history of race and its impact on current-day urban planning and policy through participation in learning opportunities and discussions within and outside of the firm.

Informed by my experience pursuing a graduate degree outside Japan and working in New York, I have identified some lessons learned, summarized below:

• Find a good mentor. In my case, at each turning point in my career (studying abroad, finding my first job, switching jobs), I was extremely fortunate to be able to seek the guidance of mentors who were several steps ahead, both personally and professionally.

• Be completely immersed in the U.S. I have only been in the U.S. for a little over four years and my understanding of its historic, cultural, and political context is still in development. It is my belief, however, that strengthening my grasp of these topics is crucial to my work and to make my experience in the U.S. more fulfilling.

• Make bold decisions. In my interactions with my peers at Columbia and at work, I was fascinated by their ability and willingness to change the course of their personal and professional lives. Not only is it common for people to select a different major for their undergraduate and graduate studies, people often switch jobs to enter different sectors or industries, and relocate to accommodate their partner’s career needs (regardless of gender). I found their boldness and agility to be extremely liberating.

In addition, current recipients reported on doing well and being active. Below is a summary.

I have an interest in urban planning and have a goal of distributing water line infrastructure to the world. In contrast to my first year of study abroad, I am now able to not only learn, but to teach other students, and by teaching I am able to see things that I did not realize before which allows me to experiment with my teaching methods. I am socializing as much as I am able with the help of the various coronavirus protocols set in place by the school.

One of my big goals is to expand the diversity of participants in arts activities, and to achieve this we do various projects such as creating arts programs that make it possible for the disabled to participate. In the US, I have been inspired by the number of people who, even if they are within an organization, exhibit great intrapreneurship and take initiative by creating new programs themselves.

I have traveled abroad to study public policy. Aside from my master’s courses, I am doing research at the Computer Science department on estimating the power consumption using machine learning. Additionally, I am studying machine learning and artificial intelligence at the Toyota Technological Institute at Chicago which is on the same campus. Currently I am temporarily attending classes online from Norway where my spouse is working.

After a short-term study at Princeton University, I had an acute realization that I needed to study more in the US and decided to pursue my PhD at Washington University in St. Louis. At my study abroad I have been impressed by classmates who are good at debating and are skilled at presenting an opposing view. Sometimes I notice that they lack a true understanding of Japan.

I decided to study abroad to pursue my interest in researching the brain science of languages which requires the study of a wide array of subjects such as physics, medical science, information theory, and linguistics. (As an undergraduate student at UTokyo Faculty of Medicine , I am able to study medicine at UTokyo). I also have interest in the ability of AI to analyze linguistics and psychology.

From last year into this year, I have written my research results in the form of three articles (under review) and three chapters in technical books (of which two are still in progress). Of these research results, one is a comparison of the effects of COVID-19 on children around the world. The concern is that the COVID-19 pandemic may have a lasting effect on education as far into the future as when today’s children go to college.*

Currently I am studying creative writing at a University in the UK through online courses. There are some differences in the approach of creative writing in the UK and in the US, and after some discussions with classmates, I proposed to the department about making the curriculum at UK universities even more “internationally relevant”. In the future I wish to serve as a bridge between Japan and China.*

While doing research in behavioral evolution at Princeton University, I founded the FUTI Alumni Association as a way for Scholarship recipients to connect. At the same time, independent from FUTI, I also established a study abroad network called XPLANE (currently there are around 850 members) which not only connects students studying abroad, but also provides resources for those wishing to study abroad. Receiving the Scholarship allowed me for amazing opportunities to open my world, and I felt that I wanted to give back.

On December 18, the second meeting took place with 17 participants, ten of whom were Scholarship recipients. President Ojima presided as host and reiterated the importance of FUTI’s mission in cultivating the next generation of leaders. Yoshikazu Tohyama of the Ito Foundation also gave greetings, followed by status reports presented by three of the scholarship recipients who were not able to attend the first meeting. Following a brief introduction by each of the participants, President Ojima asked a question, “What is a global leader?”, to all scholarship recipients A spirited discussion ensued with thoughts from the students whose majors range from engineering, sciences, education, to the liberal arts.

With everything going online and the world getting smaller, a place in the world for the “king of the hill” with a narrow mindset of “domestic-only” or “specialty only” becomes less and less. A global leader is one who stands at the top of the world and is able to confidently collaborate and exchange ideas with all kinds of people. “Brands” even including the “UTokyo brand” are becoming less relevant.

Compared to Japan, the word “leadership” is mentioned a lot more in the US. Being in a university with a diverse environment made up of students and researchers from all over the world, I often have the opportunity to be a part of discussions on a global scale such as participating in a discussion with people of British and German nationalities. In those situations, it is necessary to take leadership by understanding the cultures of other nations and distinguishing the minute characteristic of the particular situation.

It is important to look upon both Japan and the US with an objective and fair view, and to take initiative so that one can learn and understand from each other. It is also important to learn from and collaborate with those in other industries and specialties.

In observing the students around me, it isn’t uncommon to see some who evade becoming a leader. I wonder if actively creating positions such as a project leader would generate more opportunities and encourage people to experience being in a leadership capacity.

I feel that it is essential to be sensitive to change, and to be able to take in the opinions of others that may differ from your own.

It is important to have the strength to pave your own path. Although innovation often comes from the cross-pollination of different cultures and industries, there are obstacles and risks in clearing the way to be original and at the top of the field.

I strive to be a “persuasive weird guy”. On top of having the courage to do something different and to forge your own path, I feel it’s also important to not be a loner but to get other people involved as well.

The heated discussion on what makes a “global leader” continued past the scheduled end time. To conclude, President Ojima wrapped up the meeting as follows.

It is wonderful to be able to see the faces of the recipients and talk through Zoom like this, and to see that they are being active. This time we were able to have a profound discussion about what makes a global leader. I feel that a global leader is open to opposing opinions without taking it personally, is decisive, takes responsibility, and does not give up. As mentioned many times by participants, it is important for a global leader to collaborate and exchange ideas with those in other cultures and industries. In the two meetings that we have had, it is wonderful to get a real sense that the Friends of UTokyo Scholarships are helping to nurture the next generation of leaders.