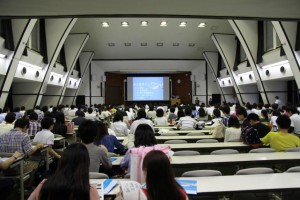 “Go Global 2013,” a fair to encourage UTokyo students to study abroad, was held at the Komaba Campus on June 6th (Thu) and 7th (Fri), 2013. The objectives of the study-abroad fair are to convey to UTokyo students the significance and importance of studying abroad and experiencing different cultures, and to motivate and help them to consider oversea-study opportunities in the early phase of their undergraduate study.This is the third year since this annual fair was introduced in 2011. The plenary session for general information held on the 6th was attended by approximately 450 students. On the 7th, individual counseling sessions were provided by representatives from the College of Arts and Sciences, the Division of International Affairs, foreign government affiliated organizations, and NGO/NPOs (domestic and abroad), and were attended by about 300 students who made up, in total, about 1000 visits to the booths of the participating organizations.
In the plenary session of the 6th Dr. Masako Egawa, Executive Vice President of UTokyo, gave a welcome speech, a staff of the Division of International Affairs gave general information of overseas study, and a staff of the College of Arts and Sciences introduced its “Globalization Office.” Then five students who had studied abroad reported on their experiences, and a panel discussion by them ensued. In the individual counseling sessions of the 7th , 24 organizations, including FUTI, set up their booths, answered individual inquiries and gave advice to the visitors. 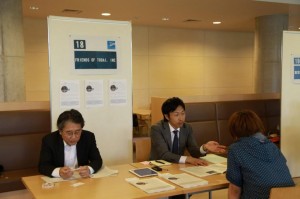 FUTI’s booth was visited by 39 students during the three and a half hour period, and Messrs. Yoichi Yoshida and Junpei Noda of the Development Division represented FUTI. Their impression was that while many students had clear ideas about their overseas study plans last year, many of students of this year were noticeably interested in having some experience of going abroad even for a short term, including study abroad. This change appears to indicate the University’s policy, which encourages many students to have some international experience whatever experience it may be, has begun to permeate among the students.
Messrs. Yoshida and Noda received questions about the length, timing, and host institutions of overseas studies. They have found this year again that the students are favorably disposed toward FUTI’s Global Leadership Award program, which is flexible and not necessarily tied to specific institutions or summer programs. As Messrs. Yoshida and Noda showed FUTI’s website using an iPad, and explained about FUTI’s Directors, the students seemed to have felt familiar with FUTI.
The following is a list of the twenty four organizations that participated in the event.