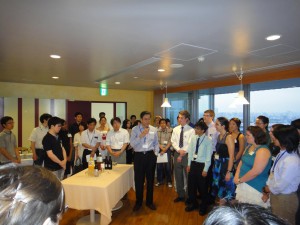 Dr. Yamada of FUTI speaks to the 28 UTRIP students.

On July 11, 2013 a reception was held for the students who participated in the 2013 University of Tokyo Research Internship Program (UTRIP) , hosted by the Faculty of Science of UTokyo. This year, 28 undergraduate students were selected from all over the world. Among them were six FUTI awardees, who were selected from more than 120 U.S. undergraduate students who applied for the FUTI summer scholarship program. All participants conducted research as summer interns in UTokyo’s science laboratories.

At the reception, Ms. Sachiko Soeda, Project Specialist of UTRIP, who coordinates the program, expressed her gratitude to Friends of UTokyo, Inc. (FUTI) which has doubled the number of awards from three of last year to six this year. Dr. Masaaki Yamada, Director of the University Relations of FUTI and Chair of the FUTI Selection Committee, who happened to be in Tokyo, attending an international conference on Plasma Physics, was invited to the Reception, met each of the six FUTI awardees. 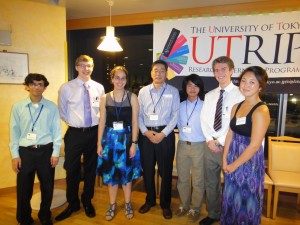 Dr. Yamada remarked “I am extremely impressed by the enthusiasm that the students show about their exciting research experiences, despite the very hot summer in Tokyo. This type of exchange program will significantly broaden the global views of participating students, and I feel that the FUTI effort has been rewarded handsomely.” He also encouraged the UTRIP students to return to UTokyo as graduate students in the future.

The UTRIP is one of the best run summer programs, and the number of worldwide applications increased dramatically from 310 of last year to 430. The number of U.S. applicants doubled, i.e., from 62 of last year to 123 this year, and most of them were top notch students from leading U.S.  universities.